As many pet owners know, it’s sometimes really difficult to get cats and dogs to tolerate each other, let alone live together. What if these animals were to achieve human intellect? Would they be able to finally set aside their differences and cooperate? The Action-RPG Cat Quest II, whose world is inhabited by anthropomorphic cats and dogs, seems to answer with a big NO. But is it really like this? Only time will tell.

An evil force has taken over the Kingdom of Felingard and its eternal rival, the Lupus Empire. It put two usurpers on the throne, Lionard the Purrsecutor and Wolfen the Labrathor. It’s up to our two heroes, an unnamed cat, and dog, to free the oppressed kingdoms and reclaim their reigns. 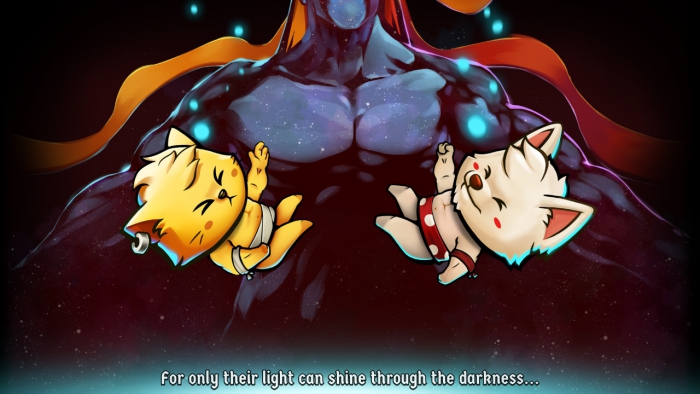 The story is simple and straightforward. It doesn’t take itself seriously and doesn’t try to pull anything but entertain the player with puny names, video game references, and other funny situations. Characters are adorable and the player will rarely find them annoying, however, it must be said that they have the depth of cardboard nonetheless.

The game plays like your traditional Action RPG, with real-time combat, leveling up, spells, and tons of items to equip. Since there are two protagonists, one of them is controlled by the player while the other by AI in Solo Mode or another player in co-op.

The world map isn’t a simple HUB, but it acts as the set for a good part of the action and narration. The game’s world is open to exploring and the player can freely move around. Despite this, exploration goes in accordance with story progression: some areas are downright impossible to traverse if the player’s level is too low.

When the player opens the menu, they can freely consult the world map, without any limitation. While this might spoil the fun of discovering new locations, it also makes the player eager to reach places they could only check out on the map.

While exploring the World Map, the player might come across many dungeons. Ruins, caverns, and castles are the most common. Some of them are necessary to make the main story advance, while others are entirely optional challenges. The player will fight enemies, avoid traps and hazards, and solve simple environmental puzzles like teleporting pods. Some of them will feature simple challenges like killing numerous waves of enemies or a strong boss. Regardless of the dungeon’s main challenge, if the player manages to kill every foe that inhabits it, they will receive a reward. 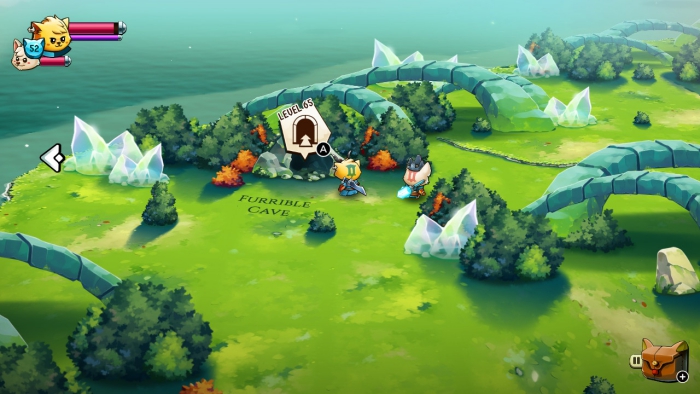 Each dungeon is recognizable on the world map by a little icon, followed by its name and the recommended level at which challenge it. There is no level requirement, therefore the player can tackle a level 99 cave at level 10 if they have the guts to do so. Dungeons are pretty short and their layout isn’t overly complicated; it’s rare to find ones with multiple floors. Despite this, they are still different enough to encourage the player to try them out without getting excessively bored.

What is an RPG without tons of items to equip? Cat Quest II sports a good variety of weapons, armors, and magical rods to equip on our furry heroes. Swords, katanas, axes, and many more weapons, each with its own attack speed and passive effects. Even Magical Rods that shoot projectiles come with different trajectory, fire rate, and buffs.

Are you in love with your Pawple Katana but it’s weaker than the old, boring Mace you just found? Don’t worry, because you can level it up! By going to the blacksmith, it’s possible to enhance a weapon by paying a monetary fee proportional to the weapon’s level. The same goes for armors. Every weapon is therefore viable to use throughout the whole game, with the exception of a few, overpowered secret weapons. In this way, the player can equip whatever they like without worrying about stats and damage output.

One of the most annoying things in RPGs is finding the same weapon multiple times. It takes up inventory space without being actually used. Cat Quest II does this, but with a twist; each time the player finds a dupe weapon, it increases the already-owned weapon’s level. Since the blacksmith can become really expensive the further the player progresses, finding these free enhancements is a life-saver. In this way, the game transforms are a rather annoying occurrence to a welcoming event.

In their heroic quest, our protagonists will fight against a great multitude of enemies. Hostile soldiers, wild animals, and undead are only a few of them. While there isn’t an astounding enemy variety, they are well distributed in dungeons, so that the player doesn’t get bored with them.

Combat happens in real-time and is pretty simple. There is only a button to attack and a short three-hit combo. The player can equip a great variety of spells, up to four of them for each character. Dodging is possible, but there is no invincibility frame; prepare to get hit if you don’t time it well. Each foe has unique attacks and, while they’re charging them, the ground under them changes color to show their area of effect and help players get away. Sometimes they might even shoot a projectile to avoid in a good shmup fashion. It’s almost impossible to feel overwhelmed by enemies since controls are responsive and fast.

Battle sequences manage to create a good balance with exploration; while dungeons are filled with enemies to the brim, they’d feel too tiny and empty otherwise, while the world map gives the player a break and has them placed in a more lenient way.

The game’s difficulty is almost nonexistent. Every time a character is KO’ed by enemies, the other one can resurrect them by staying near them, with no waste of resources or penalties. Game Over itself is forgiving since the player will respawn at the nearest checkpoint.

Enemies don’t pose a real threat unless the player doesn’t try to engage them at an incredibly lower level. If they stay up to date with optional dungeons, even bosses can get ridden off in a couple of hits. It’s also rare to come across frustrating situations that involve a not-so-intelligent AI, our companion is actually smart enough to avoid most of the enemies’ attacks.

The game follows a colorful 2D style. Characters appear as cute paper dolls with their clumsy movements and their never-changing facial expression. Enemies are well animated and they maintain the game’s overall cuteness. The world itself sports a good-looking cartoony style, even though more varied environments would’ve been welcome. 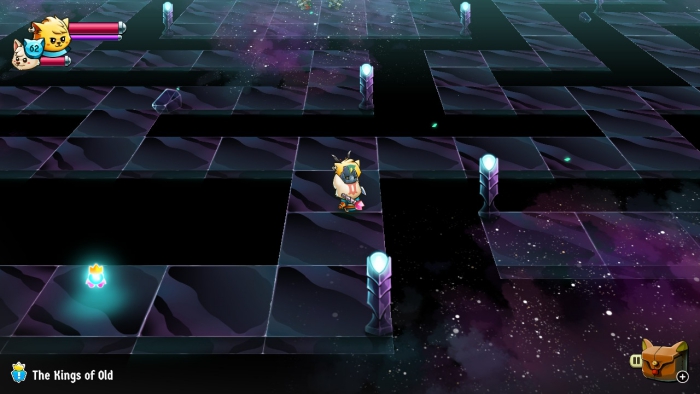 The soundtrack might not be mind-blowing and memorable, but music is still functional and catchy, from the adventurous overworld theme to the energetic boss battle music.

Cat Quest II is a rather short game; if one focuses only on the main story, it’s easy to finish it in less than 5 hours. Luckily, its length can double thanks to the optional content which includes both dungeons and side quests. Side quests are short missions that consist of finding items around the world, defeating specific enemies, rescuing characters, and even a rock-paper-scissor contest. 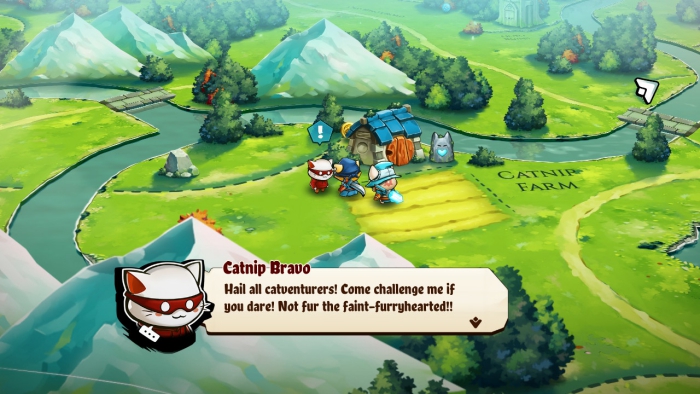 Once the game ends, the player can return to the last checkpoint and tackle any unfinished business. The co-op mode is a fun way to re-experience the game with another player; given the nature of this title, it’s only possible to engage in a local co-op. There will also be a New Game + mode, but as of writing it isn’t available on Switch yet.

Cat Quest II manages to expand upon its predecessor roots and at the same time to retain its inherent simplicity. It’s a game that won’t frustrate or bore the player because it does know when to end, even including all the optional content. People who want a relaxing and fun experience will find it extremely appawling.