This app has been reviewed using two devices, using:

Chat-A-Lot is a chat application for the Nintendo 3DS, where for $7.99 you can text with the touch screen and speak with people worldwide using the microphone, featuring dedicated servers; it aims to be the definitive social experience for the handheld, or at least one would think that it could be… 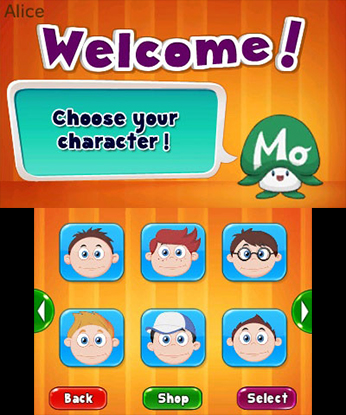 There are two things you need to do before being able to use the app: it requires having Parental Controls enabled, or you won’t be able to access the title. With that said, you need to exit, enable the Parental Controls with your PIN and email without any restriction and then open the title again. I don’t consider this a bad thing since a lot of parents doesn’t enable the Parent Control feature when they give the console to their kids.

Then you need to do the initial configuration and you’re done; still. in order to learn well how to use the interface you will need to open the manual since it can be quite confusing, and the manual is really helpful and complete.

The interface, like I said, can be difficult to learn; still, it’s kid friendly and really easy to use once you learn to use it: there’s no text, and the buttons are mostly images. One thing you need to do before being able to do a call or create a room, is to add a contact from your friend list (who also has the game), so we can say the limit of contacts is 100 (the console’s friend card limit).

The text chat is rich on options featuring, where including of course text messages, there’s also a nice variety of smilies and the chance to send a photo (from the SD card) or a drawing, where the title itself offers a basic paint application featuring nine pencil colors. The experience was quite slow but it worked well, since we tested this function between two users, we don’t know what the speed is with 10 users, but it is likely to change a lot. 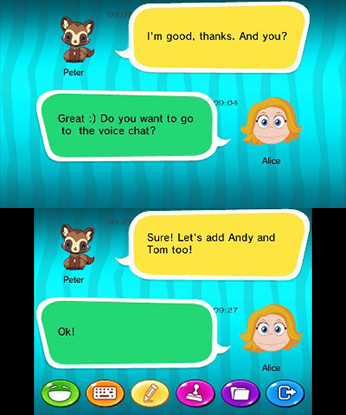 The voice chat, on the other hand, is really easy to use, like doing a phone call, and the audio quality is also like a phone… but with low signals. It’s really lagging, most of the times one can barely understand what the other is saying due constant audio shuttering, so with four users this would be even worse.

It also features a little sheet of paper featuring the paint application that everyone can share when talking with the microphone, it’s a nice touch but an option to disable it would boost the speed for the calls in my opinion.

Chat-A-Lot as a service is really bad, considering one of the features is almost useless and if that wasn’t enough, I found many situations where the touch screen stopped working, resulting in a need to restart the game to fix it.

This is the perfect example of having a great idea that can be a massive success on the eShop, but have a lot of flaws that make it a waste of the 3DS’s capabilities. A monthly subscription service would be a better idea than asking $8 for downloading once, this would have helped to make more users download the app and also allowed the developers to pay for better servers.

Conclusion:
Despite the slightly harsh start, the main problem is the functionality as an app: the interface can be better, the text chat is slow and the voice feature is useless. Can be fun for kids, but it’s a waste of money right now.