Cocoro – Line Defender, known simply as Cocoro, is a story about the four Cocoro Islands that were created by a god by the name of Perfect. The god also placed four elemental leaders (referred to as “Yoko”) in charge of said islands: fire, wind, water, and earth.

One of Cocoro‘s most prominent features is its art style. The game boasts a beautiful watercolor art based setting that really fits the world and characters quite well, although sadly this is one of the very few things Cocoro does well in terms of presentation and quality, aside from its traditional Japanese-flute based soundtrack, which complements the art style extremely well, and is a pleasure to listen to. 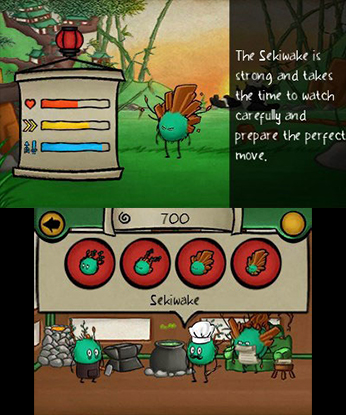 Cocoro is a basic 2D Strategy game at heart, and although it may look like a pleasure to play, it gets pretty boring and repetitive quickly. The goal of the game is pretty basic in itself; fling your Yoko from the bottom screen onto the top screen in an Angry Birds style of gameplay, and destroy the enemy Yoko’s base and any enemies spawning from it. This is fine but once you’re around halfway through the story, you’ll be starting to wish the game was over.

Thankfully, the game has a number of items that your Yoko can hold in battle that are also upgradeable by collecting the game’s currency, orbs. Orbs are obtained simply by finishing a level, whether you beat it or not, which is extremely helpful. I didn’t manage to finish upgrading all of my weapons as it is and that’s with quite a few failures on some of the later stages, so I’m glad they decided to take the “reward for failure” route this time around. 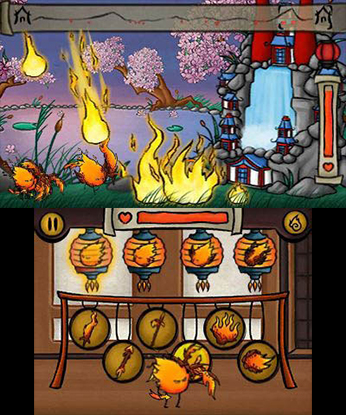 Each location in the game has a set number of 5 stages within it and, although that sounds like a miniscule amount, it’s actually a lot. The game is very long, especially for the price, and although some may prefer a longer adventure, I thought the length held the game back. Upon beating the game I had just under 16 hours logged, and while that may or may not sound like a lot depending on the game itself, for Cocoro it felt like an eternity. The game features slim to nil new game changing mechanics after you get your feet on the ground, which really made the game seem short-sighted in terms of variety in gameplay.

As for content, Cocoro does a pretty good job. As mentioned before, the main story is repetitive, but for those willing to look past that, Cocoro is a great time killer, but I would never recommend playing it without doing something else while playing.

Cocoro isn’t anything special, but it’s a decent 2D Strategy game with a lot of content, its main downfall is its repetitive nature. Its great art direction and soundtrack are its main pluses, although the game isn’t a must own. For this one, we’d suggest awaiting a price cut or sale.