Color Zen sits on an extremely simple gameplay mechanic that turns into something challenging: Connect colored shapes with other shapes with the same color until you’re able to match the color of the border around the bottom screen. This may sound extremely simplistic, but once you get in the later levels, it becomes a challenge trying to figure out which colors to connect first. Thankfully for those of you having trouble, the game allows you to skip 5 levels.

The game controls well enough. You use the touchscreen to drag shapes around and that’s pretty much it. You can tap the bottom screen twice to open the menu, but that’s it. 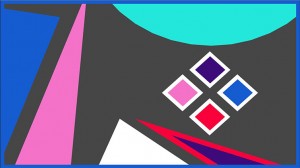 The game itself is basically a piece of abstract art; which is a good thing. It looks great for what it is and I couldn’t imagine a much better art style to fit it.

The soundtrack sounds great, too. The game features 16 unique tracks spread across the 460 levels within the game and, although that may not sound like a lot of music, it works. The soundtrack is incredibly relaxing and it fits the game like a glove. 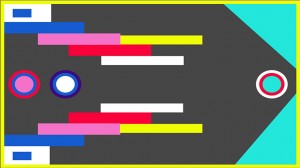 Color Zen suffers in Replay Value. Extremely. Once you beat the game, you’re done. Yes there are a lot of levels and, yes some who are incredibly bored may want to go back and experience the game again, but at it’s core Color Zen offers absolutely zero reason to go back and play again. The only thing I could suggest would be a timer on levels, but that still wouldn’t be a great incentive for you to go back and play.

Color Zen offers a great amount of content, a fantastic art direction, and a soundtrack that fits the game very well. It’s only downfall is the lack of any replay value whatsoever. If you’re on a budget, craving a puzzle game and just want a relaxing experience, Color Zen is a purchase you won’t regret.