The connection between Mewtwo and the legendary Pokemon from the recently teased Pokemon X and Y video has been confirmed. It appears that Mewtwo has either evolved or transferred into something different – with red eyes. It looks like a psychic type Pokemon, however, you never know if Game Freak will add a dash of spice to mix things up a bit. 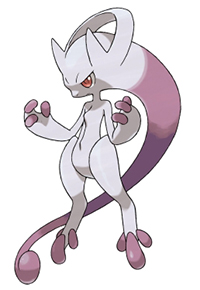 ( Photo of Mewtwo’s new form in Pokemon X and Y )

It’s been confirmed that one of the newly discovered Pokemon from Pokemon X and Pokemon Y has a mysterious connection with the Legendary Mewtwo. Are you curious? Watch the video to learn.

One rumor said that Mew and Mewtwo had a wild party at night and ended up with the new legendary in the morning. Another rumor said that scientist captured and tried to clone Mewtwo like what they did with Mew, and ended up failing in the process, resulting in a new Mewtwo form. Obviously, to know the truth behind how the new Mewtwo form came to be, you have to play the new Pokemon X and Y 3DS game that will be released in October, 2013.