It’s the first time I got masochist with a video game where its difficulty made me get frustrated and angry after losing repeatedly yet still its gameplay made me want to finish it no matter what… I was having fun meanwhile I was suffering from its difficulty. Yes, that’s my way of describing my experience: a good game with an extreme difficulty.

The gameplay is pretty simple: you need to shoot enemies and avoid obstacles from the start to the end through ten zones while you follow the game’s soundtrack where the main difference between the five levels it offers has the difficulty (it sounds short, but I unlocked the last level after four hours).

Each level features two modes (practice and normal mode) and four stars to be collected – two for each mode: one for completing the level and the other for killing all the enemies on the screen. The ten zones I mentioned before are the parts the level is separated on. 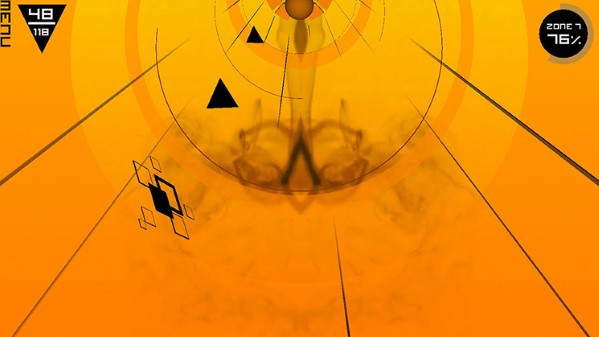 The practice mode works the same as the normal mode but with two main differences: all the visual distraction are gone and the zones are used as a checkpoints: if you lose, you will start over from the zone you got stuck on (or even select the zone you want to practice on if you finished the level in that mode).

The normal mode is, like it says, the normal level you need to beat. Beating this mode is crucial if you want to unlock the next level, however, it won’t be easy: take one simple hit and you start from zero.

The difficulty is varied in each level and like the developers said “Cosmophony is a musical shooter designed for demanding gamers seeking an original and intense gaming experience.”, they are not lying. In fact, I doubt a majority of the players will even beat level 3. In my case, I barely made it to level 4 and I can’t even start level 5 on practice mode.

If you need a comparison, it’s like playing Super Mario Bros. without mushrooms with triple the enemies and you can’t stop moving. Yes, it’s that hard. Since the high quantity of skills and precision is bestial, the developers made a great work making the controls flawless. Not to mention, the game also has support for the Wii U Pro Controller. 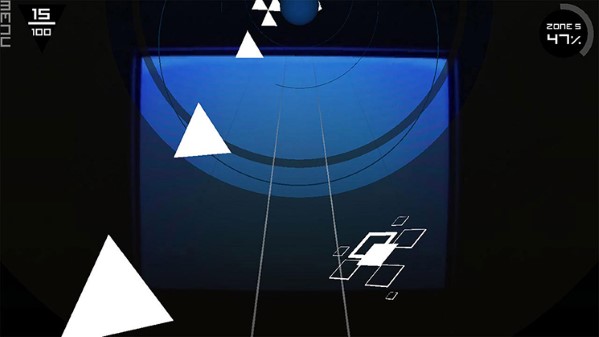 Cosmophony also did a marvelous job with the graphics, making an interesting presentation combining simple graphics and lots of colors with dynamic video backgrounds at a smooth 60 frames per second.

The soundtrack for the other side is awesome, the five tracks used for the levels are greatly done making the game feel alive thanks to the genre used (Drum ‘n Bass), still there’s a small difference with the use of the music: it won’t guide you in the level but it will make you remember it, making the practice feature fundamental. There’s also music for the training level and the selection menu, of course.

The presentation is also nicely done, including a complete manual that explains everything including the story itself, off-TV play and Wii U Pro Controller support. You can also see the background videos with the music as a prize when you finish the level (if you enjoyed the song and want to listen to it again without playing).

Conclusion:
Without a doubt, I recommend this game to those skilled players who can handle a challenge. Like I said before, I doubt normal players will even be to beat half of the game (including the fact I’m not even able to beat the last level). It has a lot of quality but its challenge is just… higher than the Eiffel Tower.