Vampire stories have been around for centuries, and humanity has twisted tales of these creatures into almost every type of story imaginable. One thing remains consistent: they need blood to survive. Authors have taken liberties with every other aspect of the vampire mythos and suited it to fit their needs and desires. A popular form of the vampire tale is that of a romance, and while the visual novel Crimson Spires isn’t all about romancing these creatures of the night, it does give players a pretty good taste of what that might be like amidst a backdrop of mystery and fear.

In Crimson Spires, the player takes on the persona of FBI agent Erika Wright who is driving alone one night when she is diverted to help recover an escaped serial killer. August Flynn, the presumed Heartbreaker Killer, was released when a mysterious creature crashed into his transport van. As Erika confronts him just inside the limits of a little town called Bataille, strange pillars bearing crosses rise into the sky and surround them. Anyone who tries to pass between the towers loses their head, trapping Erika, August, and the rest of the town. 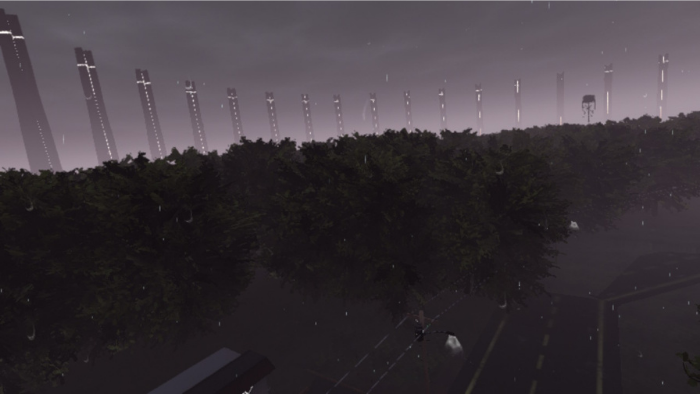 Months pass, and Erika has taken upon the mantle of sheriff for Bataille after all of the town’s law enforcement die trying to escape the towers. Flynn is locked up inside the one-cell jail, and there’s little for Erika to do until one day when a mother comes in pleading for help looking for her missing daughter and her boyfriend. As Wright works to uncover what happened to the two young lovers and find a way through the towers, she uncovers some of Bataille’s greatest secrets. Along the way, she has the chance to grow closer with four potential love interests. Julien and Liam Bataille are brothers whose family shaped the town, Maddy is an enthusiastic but stubborn young woman with close ties to the Batailles, and August Flynn will stop at nothing to be Erika’s partner as she investigates the town. 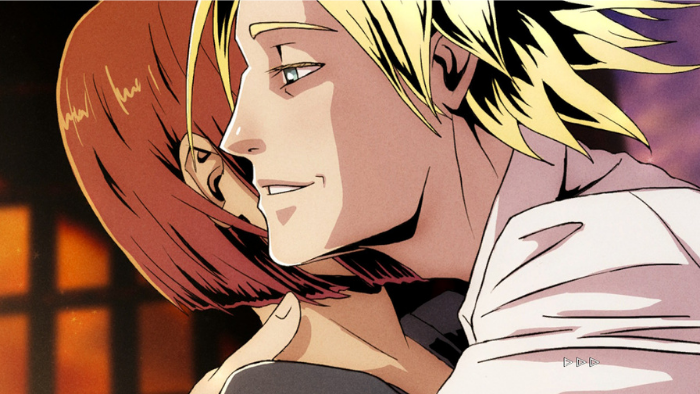 Crimson Spires is a romance story, but it is also a thriller, and the game certainly knows how to keep the tension in the air. Particularly in the early game, there’s a perfect sense of unease and dread lingering in every music note or uncertain glance from the citizens of the town. As one mystery is answered, another steps in to take its place, leaving players hanging on every word. The game is based around the mystery and not the answers; it doesn’t show its hands too early, and sometimes, it never shows its hands at all. For some, the atmosphere will be enough to keep you satisfied, but if you need answers for every curiosity the game tosses out, you might find yourself frustrated at the end of the story.

As a visual novel, there are a few gameplay elements sprinkled throughout the narrative to provide a more interactive feel. The biggest mechanic is similar to other visual novels: there is a choice system that accumulates favor with one of the four love interests. While many games with this system force you down the path of the character you have built the most relationship points with prior to the divergence point, Crimson Spires avoids that pitfall entirely by allowing you to choose a partner for your investigation. Once you have completed the first route, a special option unlocks in the menu to go back to the divergence point and select a different partner, skipping the first five chapters of the game. It’s an uncommon choice for a game, but a welcome one. 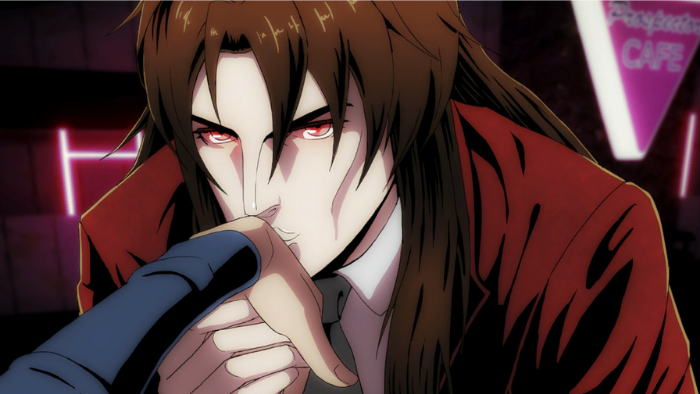 While going down one of the four paths, Erika has multiple choices on what to say to her partner or actions which work for or against them.

These choices will point you towards the good or the bad ending for each character. When an option has been chosen, the game flashes a small screen to indicate if your partner liked the choice you made or not. Three of the four love interests are very easy to pick up on what needs to be said, while the fourth one can be a little trickier to navigate, but the game makes it easy to save and reload to the point of decision if you want to change your answer.

The other section of gameplay in Crimson Spires allows you to control Erika during certain sections of the game and walk around specific areas. The environments are basic and there is rarely much to examine, but something about the game dropping the player into an abandoned house or the scene of a murder with little warning ramps up the tension incredibly fast. The locations are also fairly rudimentary in their design and graphics, but that adds to the fear factor. Despite the atmosphere, the controls in these sections can feel a little off, particularly when turning to look at certain things around you. Still, it gets the job done and there aren’t enough instances of these to make it a real problem. 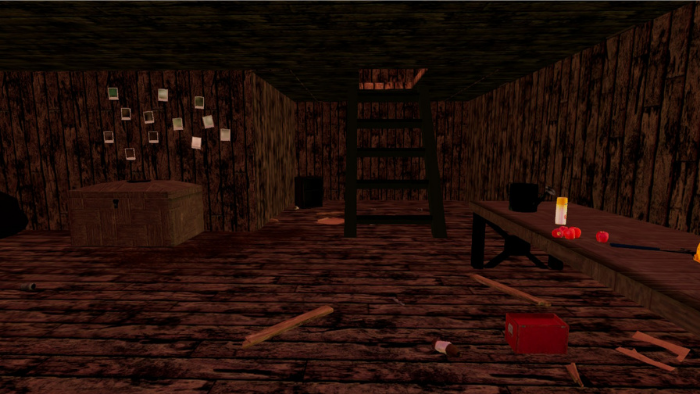 Since Crimson Spires is a visual novel, the art can make or break the entire game. While the sprites and CGs in this game aren’t anything special, they look nice and serve their purpose well. They’re never distracting, and often help supplement whatever the dialogue is trying to say. Each character comes with multiple sprites, changing poses and expressions based on what the scene calls for. The characters also sometimes change clothes, or lose them depending on which route you’re on, and the sprites change accordingly to reflect that. It allows the characters to feel more real and dynamic, as if you’re talking to an actual person with motivations and desires. 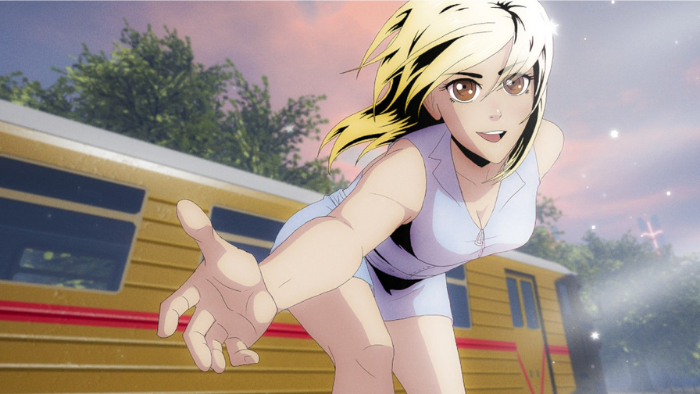 Perhaps the biggest flaw in the sprites is that a few of the characters, mainly some of the women, have a bit of a proportion problem when it comes to the eyes. This is most noticeable in Maddy, one of the four love interests. She ends up with a bit of a bug-eyed look for most of the runtime of the game, and since she’s one of the major characters, it can be harder to ignore than smaller characters who don’t get as much screen time. Still, the proportions are easy enough to gloss over after a few hours of playtime, and Crimson Spires’ art does such a fantastic job immersing the player into the town of Bataille that it’s hard to hold it against the game.

The music of Crimson Spires does an incredible amount of work towards creating the atmosphere that makes the game such a success. Composer Jenny Gibbons has made a distinct soundtrack that manages to balance the creepy, tense moments with the softer, more tender romance scenes. Every one of the 38 tracks included in the game carries a strange melancholy undertone, reinforcing just how alone Erika and the town of Bataille are trapped inside the strange and dangerous towers. 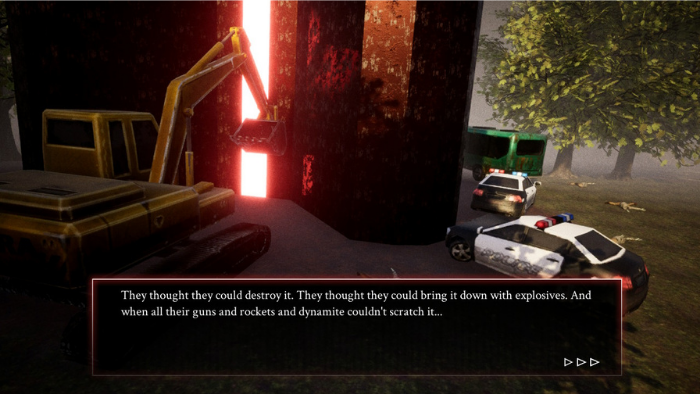 Crimson Spires alternates between full voice acting in some scenes to little signature exclamations from the characters in others. All characters are voiced except for Erika, who serves as a “silent” protagonist despite being a very active and vocal character. The performances from Charlotte Bataille and the four love interests are incredibly strong. Amber Leigh puts an incredible amount of work into her performance as Charlotte, making her fun and flamboyant without compromising on the fear factor when she needs to be intimidating. Bradley Gareth does a phenomenal job as August as well; he manages to make August’s suave and sometimes condescending philosophical nature come off as authentic and attractive. 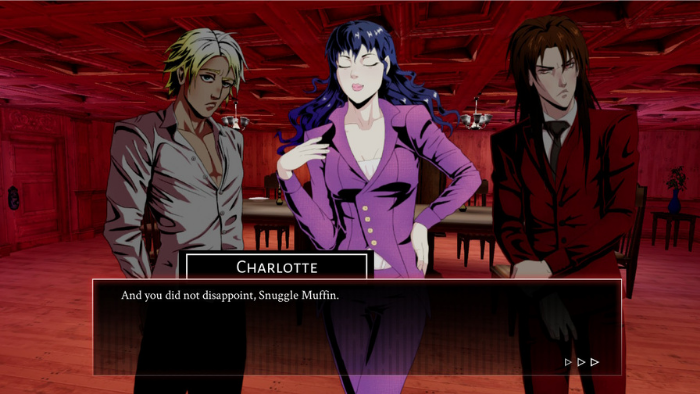 A few lines here and there do come across as awkward or stilted for some of the characters. It’s most noticeable with Liam and to a certain extent Julien as well. The problem arises mostly in shorter lines that don’t give much context to the rest of the scene, but the lines are read much calmer than they should be for a tense situation. It’s unclear whether there wasn’t enough context or vocal direction for the actors to follow or if the game developer simply chose to reuse lines from a different part of the script, but the performances shine so brightly the rest of the time it’s clear it’s not simply poor acting.

Crimson Spires will give you a fair amount of bang for your buck when it comes to playtime. While you can technically just pick one route and play through it to get an ending, the game encourages you to branch out and play all four main routes. Each route provides some answers to the overall mystery of the town of Bataille and the towers, but also asks more questions to keep the mystery alive. The reveals also come in a way that makes it difficult to suggest a definitive route order. Even if you know the answer to a mystery in August’s route from playing Liam’s route, there are new mysteries to uncover. 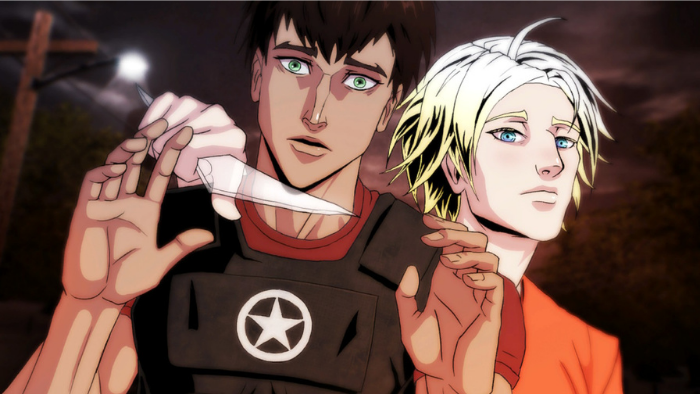 The Switch port of the game also comes with a New Game Plus mode that provides an extra “route”, and as expected, more answers and mysteries. This mode unlocks by playing through the original four routes, so it’s a good incentive to push through and play the game to its end, even though the new route might leave players more frustrated than before when it comes to the mysteries surrounding Bataille. There’s some bonus content after NG+ as a reward for pushing through. The game runs 20-30 hours depending on how much of a completionist you are and how fast you can read. Being able to jump right to the decision point makes replaying Crimson Spires so much easier.

Crimson Spires is a beautiful enigma of a game, romance wrapped in mystery with a memorable cast to top it off. Anyone looking for a romance game with a good plot that isn’t just “slice of life” should be satisfied. Fans of media like Salem’s Lot and Shiki who are looking for another small-town vampire horror to sink their teeth into might find something worth biting with Crimson Spires. That said, players who need every single question wrapped up neatly in a mystery should walk away, as this story cares more about the setup and the atmosphere than it does about providing solutions. Still, the game knows what it wants to achieve and is so freaking good at it, it’s hard not to recommend.