There is a quest called Cu Chulainn’s Training in Shin Megami Tensei IV, and this guide shows you how to complete it. The information this guide includes are; finding Bugeikan which is north of Kasumigaseki, learning what element attacks Setanta is strong and weak against, and the reward players obtain after completing the quest. 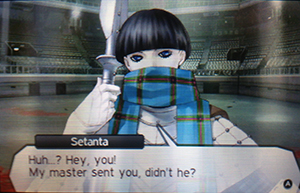 You should now be located at the Chiyoda Region (the name appears as soon as the screen loads). If you’re seeing the map of Tokyo, you’re on the correct path. Move your character’s location symbol up. Make a right turn at the first path you see. After, go down. Make another right turn, then go up this time. After, move left, then go up, and finally, move left until you see an area with a red warning sign. That’s where you can find Setanta.

During the journey, you should notice some names of locations changing of the 3DS bottom screen. This can be useful to help you know that you’re on the correct path. Below, I made a list of the location names that are changed as you progress (after following my instructions) :

Note: Setanta is in an area located in Kanda. That means Bugeikan is in Kanda.

Setanta should appear, and to complete the quest, you must defeat him.

What Is Setanta’s Weakness in Shin Megami Tensei IV

Reward for defeating Setanta from the quest = Brionac x 1.