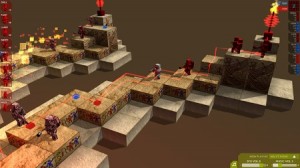 GAMEPLAY:
Nnooo is bringing us a game that mixes the RTS (real time strategy) with TD (tower defense) bringing a game with an original mechanic that works great, still I should say if you lack of patience, maybe this game isn’t for you (or any strategy in general).

There’s a lot of stuff I can talk about this title, but I will try to keep it short: the core idea of the game is to use your resources to buy units, with the objective of beating your enemy. Everything is made on the go, in real time, so you need to be careful in order to not do mistakes.

Cubemen 2 features a total of seven different modes, being all of them variable for the offline single player and the latest five also for the online game: 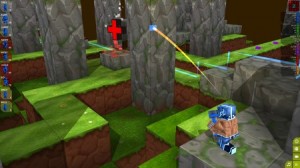 The game is limited to six players and the online can be filled with CPU bots. They’re plenty of options that can change the experience when playing, that doesn’t just adjust the difficulty but also the type of strategy you will need.

The controls of the game are pretty well done, and it won’t be hard to learn to use: with the L stick you will rotate the camera, with R stick you can move it, the Control Pad to zoom the game and the rest the touch-screen of the Gamepad is required to play.

If you think the game will stop here, you’re in serious problems. Cubemen 2 offers a lot of replay value that add the game duration, including 59 achievements, a level editor with the option to share creations with another players (not only Wii U ones, also Steam, OS and Android ones) where they can be downloaded. The level editor has a lot of options allowing a big variety of different designs, still they’re a few limits still the size of the map can be incredibly big. 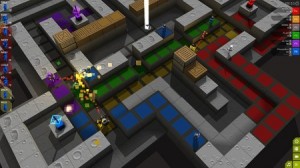 GRAPHICS AND SOUND:
The game looks great, and it will be hard to be tired of the graphics. Yes, everything is based on cubes, but they are 22 different skins for your characters (plus nine different colors variations) and 27 different level themes to use. The experience is really smooth even when there’s a big quantity of elements in the screen.

The soundtrack of the game is quite limited, but they’re great and the sounds effects are also good. A bigger variety of songs or being able to hear our own music with the SD card would be a great option considering the vast replay value of the game. 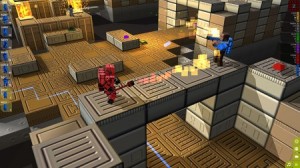 PRESENTATION:
The presentation of the game is excellent, for not saying perfect. Including a good tutorial and some explanations, a good interface, a lot of different settings for the game (both the game itself and the sessions), great replay value, a good quantity of content, and I can continue like this saying how well done it’s.

CONCLUSION:
As a real time strategy and as a tower defense game, it works great and offers a lot of content without asking a high price for it. If you love the genre, the customization options and/or compete with others, this is a must have for the system. A good example of the good quality side of the eShop.