Darksiders 2 is a great game that sometimes suffers from slow down. Originally out in 2012, the 2019 adaptation doesn’t have any many options in terms of framerate as the Xbox One and PS4 version of the remaster. That’s okay though as what it lacks in options it makes up for it in portability. Playing through this action-packed adventure in handheld mode is something that can’t be matched.

The story picks up right where the first Darksiders left off, but at the same time is a self-contained story and won’t leave the player feeling confused if they jump in on Darksiders 2. War, who is one of the four Horseman of the Apocalypse and is also the main character of the first game, is in prison and it is up to Death to save both him and humanity. Of course, it can never be just that simple with many twists and turns in the story. A classic adventure tale setting out trying to get to the tree of life. Playing through the entire story will easily take at least 15 hours with the DLC adding even more time to complete everything. 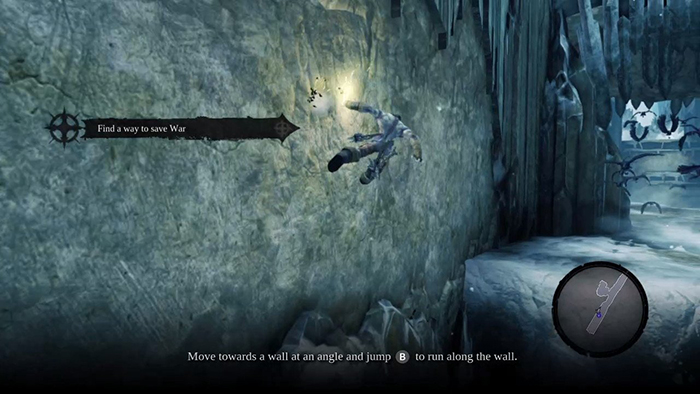 Just like the original Darksiders game, the sequel is a very tight experience and builds new and exciting features to the series. Solving puzzles in dungeons and getting key items and abilities to help complete the next dungeon and challenges ahead.

Dungeons work similarly to The Legend of Zelda’s dungeons at times or even like the card game memory. How on earth do they work like the card game memory you may ask? Well, when you see something in the world or in a dungeon and it just doesn’t make any sense with the items Death has on hand. One thing leads to another and you’ll get a gun that blows up vines. So all of a sudden all of those vines Death passed along the way on the adventure suddenly become new places to tackle and explore. Most of the time they will only lead to a new powerful weapon while other times it allows for you to solve open up a part of a Dungeon that leads to the boss. 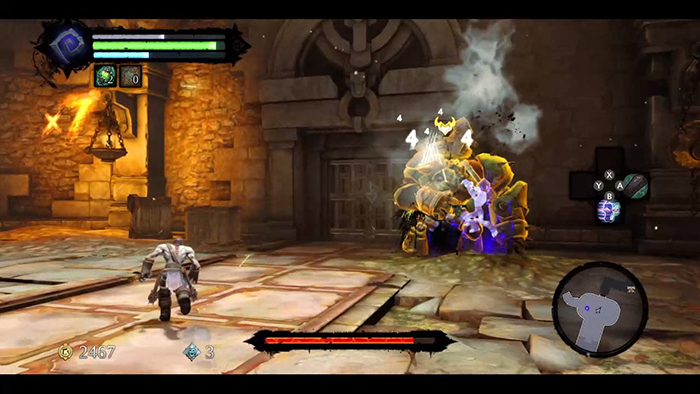 Darksiders 2: Deathinitive Edition sports a killer loot system as well as gaining experience and filling out a Skill Tree. The skill tree is broken up into two different categories. Harbinger, which focuses more on physical attacks and skills, and the Necromancer, which is all about spells and calling on zombies and crows to help in battle. Harbinger’s side offers powers such as covering Death in extra armor to help take damage while the Necromancer side will have him summoning zombies or crows to help in battle. 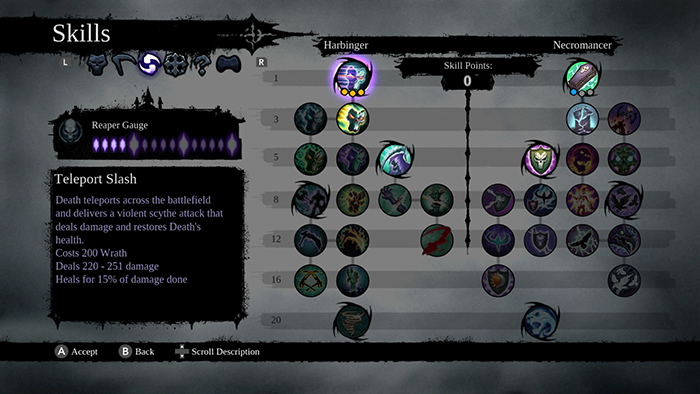 When Death isn’t solving puzzles in dungeons and out in the open world, he’s put to the test with fast-paced combat. Dodging enemies and striking when there’s an opening is the key to making it through all of the enemies in the game. Bigger enemies and boss encounters in the dungeons will sometimes result in some quick-time events. So get ready to rapidly tap the Y button in order to pull out on top of the bosses. When certain enemies are low on health, Death can also perform a finishing blow that seems to give more experience and will even give back some health with it. Randomly when an enemy gets killed they will drop a weapon or gear. Sometimes they are better than what you’ve got on at the time and can be easily equipped without leaving the action. One of the coolest things about the gear and weapons is they all look different and the better the gear the fancier the designs get and it shows on Death as he’s wearing it.

Oh heavens no! The game starts out so good and the opening area will run nice and smooth. If only the rest of the game ran that nicely. Once the game opens up and gives the player free range to go where ever they went the game will suffer from slowdown. Riding around on Death’s horse, Despair, doesn’t help matters either in terms of frame rate dips, but he’ll help move through the environments faster. Multiple enemies in an open field and the game right suffers a lot of slow down. Certain areas later in the game are worse than the opening area as well. Luckily, this can be skipped with fast travel and that comes pretty early on in the game, but getting to a small area with multiple enemies will also cause the game to try to keep up. 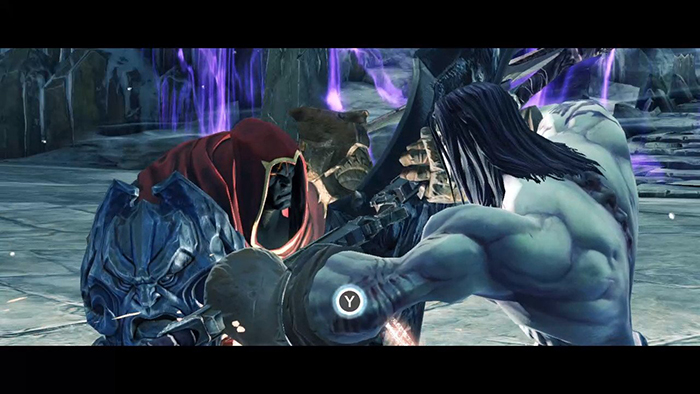 If only the visuals were able to be as great as the music and audio, but that is fantastic from the jump. Playing through this game with the sound off just seems like a bit of a crime as the sweeping music really sets the tone for Death and his adventure ahead of him.

Differences Between Darksiders 2 and Its Deathinitive Edition

The Deathinitive Edition of the game has quite a few differences compared to the original game. The DLC which was released is thrown into the game and is seamlessly integrated into the final product. The story missions add hours and hours of content and plenty of new and different weapons and armor to the game. They also went back and tweaked the loot drops in the game so you no longer get nothing but the same items over and over and will see a lot of different items, including better items, from random enemies. Improved visuals with better shadows and improved textures from the world as well as the characters have been added to the mix. It is fairly noticeable when compared side by side with even the Wii U version of the game.

Darksiders 2 is a game worth picking up, especially if it is something that slipped by on previous consoles. If this is a game that you played before it might be something you’d consider playing again in a portable form. What makes the game the ‘Deathinitive Edition’? Well, some improved textures over the original game and it even include all of the DLC that came out after the release of the game. The combat and puzzles will keep people entertained while the story is enough to motivate players to see it through to the end.

Darksiders 2: Deathinitive Edition gets a 7/10