Dead Cells is a fast-paced side-scrolling hack and slash RPG. It’s in the genre that’s typically referred to as roguelike. Which means everything is randomized, from level layouts to enemy placement. In between all the frantic fights, you will get small safe zones to plan out your next move. It’s like a cross between some of the best Metroidvania games and Binding of Isaac.

Dead Cells won’t ‘wow’ you in the story department. In fact, it hardly has any dialogue at all. It tells its story from select NPCs and exploring the many areas of the game. The island is mysterious, can you find your way off of it?

Dead Cells is your typical hack and slash game. You can equip a maximum of two primary weapons and two secondary items. Primary weapons can be swords, rapiers, and crossbows while secondary items can be traps, grenades, and powers. Your weapon can vastly change the experience of each run, making the game feel fresh every time you play. Each item is correlated to three types; Brutality (red), Tactics (purple), and Survival (green). Finding and using scrolls allow you to level up a certain color, making the colored item stronger and increasing your max HP. You can also find rare blueprints that will unlock new weapons.

Button mashing won’t win the day. Timing is key to dodge roll at the right time and if you pound the buttons, you will miss the opportunity to find that perfect opening to attack an enemy’s weakness. The gameplay loop is starting with nothing, picking up random weapons and scrolls, and getting stronger while trying to find the exit to the next area. After every couple of stages, you will encounter a boss fight. Defeating the boss usually gives you better weapons and sometimes even blueprint drops.

When you die, your current run is over. You will lose all your weapons/items and will then have to start a new run. After each area, you will have the opportunity to bank blueprints and “cells”, the currency to unlock blueprints. So you won’t lose those if you die. As you play, you will unlock permanent upgrades that you will not lose upon death which may help in future runs, such as being able to smash through certain floors. The game is very difficult and you might not last a few minutes the first time you play, but after getting used to the smooth controls and how the game works you will experience longer and longer runs before dying. 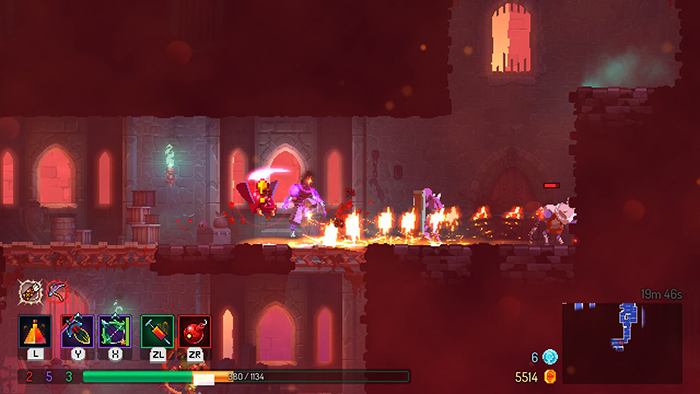 After playing to a certain milestone, you will unlock various game modes – normal, hard and custom. Normal and Hard are the regular game modes while a custom mode lets you basically play the game any way you want to from choosing your starting weapons to how much health you will have.

The daily challenge will give all players a chance to tackle the same dungeon and fight with your friends for the daily high score. You will need to be connected to the Internet to access this feature.

Dead Cells uses a sprite/cell-shaded look. The backgrounds are easy on the eyes and the special effect work well on the switch screen. The lighting from spells and guns look great. 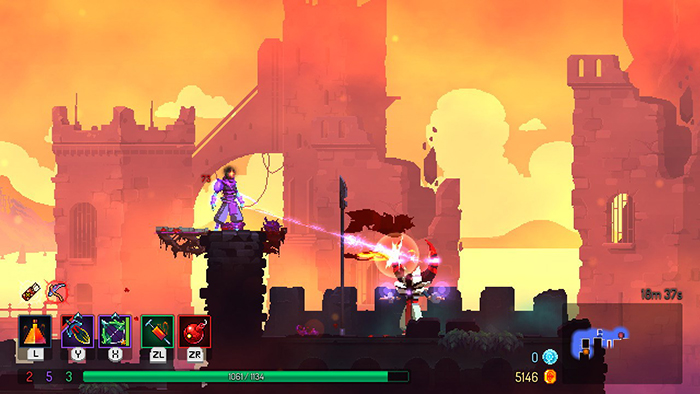 As for controls, the face buttons are used for attacking and jumping, as well as a ground roll. This roll is very important as it will give a couple of invincibility frames so that you can roll past and through enemies to avoid attacks. The shoulder buttons are designated for your powers. The setup is very intuitive and you will be double jumping and rolling like an ace in no time.

The soundtrack is very immersive and fits the tone of the game perfect. It’s even more amazing when you know that is all the work of a single composer, Yoann Laulan. The sound effects all sound snappy and nice. Works well with the joycon’s HD rumble feature as you will be able to feel every slash of the sword and every vibration of magic spells that you will be decimating your foes with. Overall is very excellent and puts you right into the feeling of this desolate barren place.

If you are into frantic side scrollers that can be brutally hard then you will definitely want to check out Dead Cells. It’s one of those games where you get better as you play and gives you a rush when you finally defeat a boss that’s been causing you trouble. Lots of options and replayability will give you dozens of hours of gaming fun.