Lilith is a level 50 demon of the Night race in Shin Megami Tensei IV. During the game, if you choose to side with Jonathan, you will be required to slay her. While I will not reveal details about Lilith that can ruin surprises in the game for you, I will tell you how to defeat her. 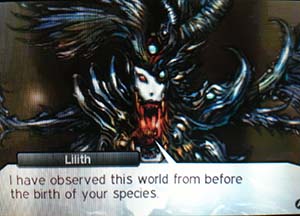 How To Defeat Lilith in Shin Megami Tensei IV

What is Lilith’s weakness in the game :

Lilith may be powerful, however, she does have a weakness. That weakness is gun element skills. Be careful because she adsorbs any electric element skill and you will lose your turn(s). During my battle with Lilith, physical and almighty skills were the only elements that did sufficient damage to her. Fire, ice, and force element skills all took out around the 30-50 HP range while my protagonist was level 75.

Similar to Minotaur and Medusa, Lilith will communicate with you during battle. The choices that you make will decide if Lilith’s stats will increase or decrease. To learn the answers for decreasing her stats, keep reading :

Answer to the first question – After taking out some of Lilith’s HP, she will ask you about your hatred to her for trying to change the world. The wrong answer will increase her attack and aim. Answering correctly will decrease her attack.

Answer to the second question – The second time she talks to you during battle is when she mentions the power that you have in battle. She will then ask if you feel the thrill of combat and the rush of power that surges from within. Answering correctly will decrease her defense (it is possible that the stat is generated randomly).

Having a demon who can repel gun element attacks can also be useful during your battle with Lilith (I used Alice of the undead race – a special demon fusion). When Lilith loses a huge chunk of HP, she begins to use her almighty attack, so be very careful.

Carry demons with powerful gun element skills (eg. Heaven’s Bow, etc). After constant hits, Lilith will eventually fall. Moves that repel physical hits will also come in useful because chances are, Lilith will use two physical skills, followed by a magic skill at the beginning of the battle. Halfway through the battle she may start using almighty attacks.