There is a quest called ‘Demon Guarding the Shrine’ in Shin Megami Tensei IV. The Demon Guarding the Shrine quest isn’t as difficult to complete as you might think. When I completed it, I was at level 37, which is low for accepting the quest. This guide lets you know where to find the Kanda Shrine and how to easily beat Okuninushi. 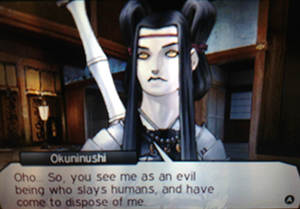 ( Screenshot: What Okuninushi looks like during the Demon Guarding the Shrine quest in Shin Megami Tensei IV )

How to find Kanda Shrine in Shin Megami Tensei IV

This is the easiest way to find Kanda Shrine when I have no clue where you are in the game. Use the terminal to transport yourself to the Kasumigaseki Terminal. After, exit. You should be at the Kasumigaseki Counter Demon Force building. Use the elevator to go to the first basement floor, Kasumigaseki – Nagatacho Passage. Follow the passageway to another elevator and use it to travel to Sakurada-dori. Find the exit icon on the map and go to it.

Once you’re on the main map of Tokyo (Chiyoda Region of Tokyo), move your character’s symbol up, followed by a right turn. Move down, then take a right, and go up. After, make a left turn, then go up, make a right turn, and go up again. Enter the second area with a red warning mark and you should find Kanda Shrine. Okuninushi is located at Kanda Shrine and you must slay him to complete the Demon Guarding the Shrine quest.

What is Okuninushi’s weakness and how to beat him?

Demons that I used to slay Okuninush :