The Disgaea and Plants vs. Zombies franchises have been highly successful and genre-redefining for their respective audiences, and Demon King Box – CIRCLE Entertainment’s latest release on the Nintendo eShop – shows heavy influences from both aforementioned series yet never comes off as a travesty – it’s different, unique, fun and mixes RPG and tower-defense elements with such ease and in such a way that it will appeal to fans of both genres. Demon King Box is an excellent game, and the only setback is a bad localization.

The story goes that the evil, conniving Demon Lord was defeated and about to be sealed away in a box by humans, and in his desperation to make sure his power wasn’t snatched away forever he handed over his crown to… a pig. A demon pig, yes, but a pig nonetheless. Punee Dack is the name, but he changes it to Poohdark after becoming interim demon king. The Demon Lord returns, but is still in the form of a box (hence the game’s title), so he appoints Poohdark his army’s general and tells him to gather his minions because they’re going to take the demon world back by force. Along the way they meet other characters who, once they join your army, can also lead your forces during the missions. The humorous storyline shows clear influences from Disgaea, but much to my disappointment, the localization is sub-par. While it’s never bad enough to cause you to lose the plot completely, it does make for some head-scratching when Poohdark calls the Demon King ‘Queen.’ 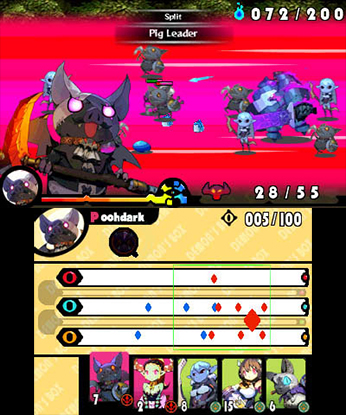 In battles, your minions are led by a Hero character who you have to defend from charging enemies, and you drag and drop minions onto the battlefield using the touchscreen while observing the action on the upper screen. Deploying minions drains your energy, which refills constantly at a slow pace, and each type of minion has a ‘waiting period’ before consecutive deployments, like in Plants vs. Zombies. Your units advance on the battlefield, battling enemy units they meet in their path, and have different amounts of health based on their stats. Some missions have you defeating a set amount of enemy units, while boss battles require you to defeat the enemy Hero character. The Hero characters can use special moves if they have the energy. Special moves have many different effects, be it raising your units’ stats for a short while or a direct attack on enemy units. Between missions, in the ‘world map,’ you can research minions, feed characters to make them level up, and ‘fuse’ minions to create new ones. 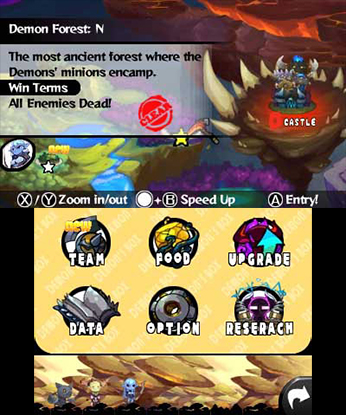 The visuals are great. The main characters look great, the minions look excellent, and the anime art style increases the game’s appeal to its intended audience. The visuals effects, such as those during special attacks, look good. I’d even go so far as to say that in terms of art style, Demon King Box is visually one of the best games on the 3DS system. The game is pretty fan-service-y in terms of character art, by the way. The sound effects and music are also well done.

Demon King Box is one of CIRCLE Entertainment’s best releases so far. It isn’t very long, but it’s fun and addictive and I can imagine anyone who snapped it up for its low price would be willing to play it again. The localization could have been much better, but the gameplay isn’t something any strategy RPG or tower defense fan should miss.