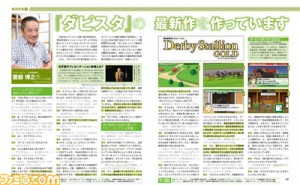 The famous horse racing/derby franchise is coming back according to the Japanese gaming magazine, Famitsu. Derby Stallion Gold will be making its way onto the Nintendo 3DS eShop this winter in Japan. There are no words on whether it will ever be released outside Japan but as soon as we hear anything, we’ll update you.

This week’s magazine includes a detailed interview with the creator of the game, Hiroyuki Sonobe and also includes a few screenshots of the game. The complete interview is in Japanese, so you’re welcome to translate it if you can.