What would you do if your government went corrupt? Surely you will try to vote them out of power. Things are different in the Netherworld. Power is everything. And when you’re not satisfied with the way things are going, you must demonstrate that power to put things back intact.

After losing his powers and giving up his title as a tyrant, vampire demon Valvatorez takes on the role of a Prinny Instructor. While proudly performing his duties, an unfortunate incident forces Valvatorez to take action to save both the Netherworld and the human world.

The story is told in episodes where each episode contains several parts. Each part includes a battle and often cutscenes. As the story plays out, players will come across the funny, sad, mean, and heartwarming moments of the game, possibly even moments that spark your curiosity too. The game does not fall short on comedy. It will surely keep you entertained if you want a good chuckle. Even though the main story’s episode count may seem low, it will still consume a hefty number of hours from your day. The battles, cutscenes, dialogue, and even the grinding will total up to 40-50 hours. 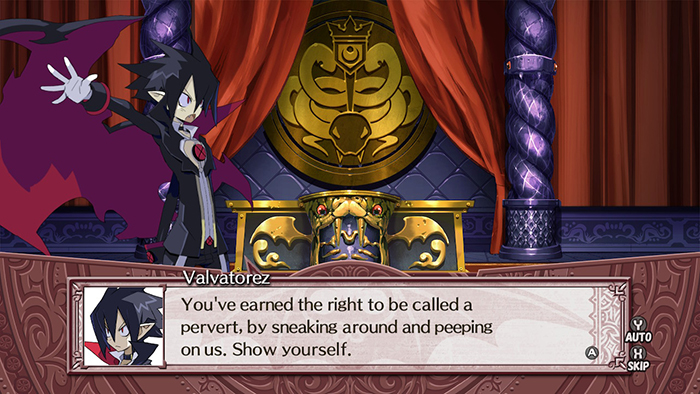 Defeat isn’t all too bad as it triggers a different story ending, however, it does not mean you can continue from the ending. It prompts you back to the start of the game but can be avoided by reloading a previously saved file. It’s a pleasant addition knowing the developers did not have to do it. Much better than a boring ‘Game Over’ screen.

Unhappy with the way things are going, Valvatorez and his werewolf servant start up a regime. Recruiting characters and making your own demons will be possible. Each character has a class, and promotions will be available as the game progresses.

Netherworld: Base in Hades

Your base in Hades is where you will spend most of your time when not in fights. The area is surrounded by NPCs and shops. The NPCs always have something new to say with each episode for you to enjoy a fresh set of dialogue every time.

Each visit to a shop reloads the stock with a fresh set of content so you never have to worry about running out. Purchasing a lot of items gain you access to better gear, however, it can be troublesome for newcomers to catch on to the way it works.

The Battles and Difficulty

A tutorial at the start of the game, in the form of levels, will help you learn the basics of combat. It’s a great tutorial too. It also points you to a weapon specialist to learn more about the different types of weapons the game will offer. It’s a bit of reading but the information is important to keep in mind when building up your characters so they can perform their best.

The battlefield is grid-based consisting of enemies, effect blocks/panels and other perishable objects. Characters move and perform actions in turn-based phases. These actions include short-range and long-range skill attacks. Action scenes are played on the same map when characters execute their actions. Unique skills have their own little animated scene showing how enemies are attacked. All of this keeps the excitement going during battles, even if it gets a bit repetitive at times.

It can be difficult to move around the battlefield using the analog stick or the D-pad when first starting out, but over time you get used to it. Blindpoints exist on some of the maps when executing your characters’ actions depending on the angle. This makes it almost impossible to see your character swinging an axe or sword at the enemy. Even though it’s possible to rotate the camera, it cannot be done during a battle scene, therefore, it does not help in this scenario. 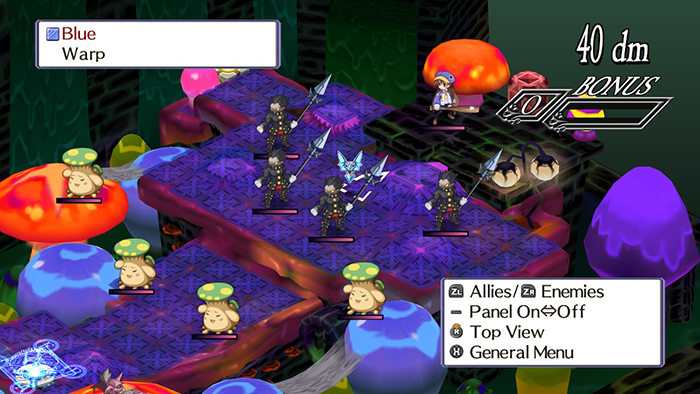 Most of the stages are generally easy. That is if you keep your gear up to date on most of your main units. Keeping your old weapons and armor ‘as is’ while you progress further in the game will not work out in your favor. Not taking advantage of some of the options available at the Senate can also be your downfall. It’s a game where you must make the best use out of everything at your disposal. A careless mistake can be the end of a character. It can be as simple as ending your turn without letting all of your characters move or perform an action. Some stages require strategic thinking to figure out how to clear them. More, especially in the later episodes of the main story, would have been welcoming. From team attacks to throwing blocks to lifting certain enemies to bypass obstacles.

Leveling up some of the new characters can be troublesome as the finishing blow must be made to gain EXP. Alternatively, EXP increasing items can be used. One way the game makes leveling newborn demons easier is through their magichange ability. It lets the demon transform into a weapon to be equipped to another character. This character can fight its battles for it and level it up during the process. It makes leveling weak demons a lot easier so that they can hold their own later on.

Characters and skills can be sorted to your liking. Organization is important when a large quantity of something is involved.

As characters can only equip one weapon at a time and the fact that weapon-related skills shown during battle are limited to the weapon type equipped, this isn’t a major concern as you’re not going to scroll through many skills to find the most powerful or your favorite. However, it’s still useful to place the best and worst skills wherever you want. 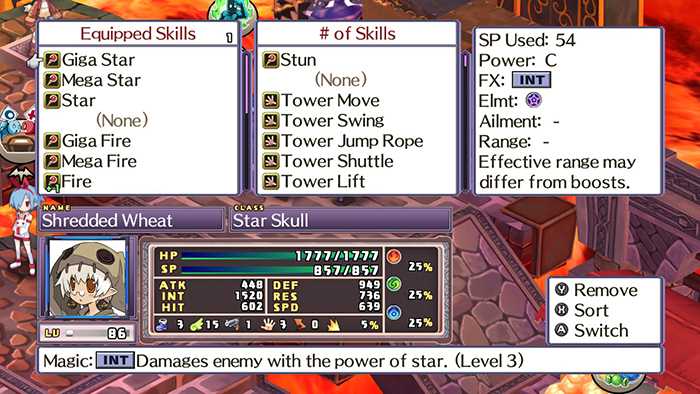 The position of characters from the list where you deploy them at the start of a battle can be organized too. Several options are available to order them depending on a specific stat or trait. If neither are to your liking, there’s also an option to manually let you place characters wherever you like on the list. It’s the best option for the players who want full control.

Disgaea games are known for heavy grinding. The concept does not change with Disgaea 4 Complete+. The Item World’s purpose is to level up weapons so their stats increase. The more stages you clear, the higher the level the item gets. Due to how each item needs to level up, it can be time-consuming to level up each item your characters use. It isn’t necessary to level up all items, however, it certainly helps.

Players should expect to visit the Item World stages a minimum of ten times throughout the main story. From leveling up accessories to getting a higher hit rate to leveling weapons to increase their attack. From time to time, you will notice enemies evading attacks or not taking enough damage, therefore the Item World can be considered as your biggest ally.

With that said, weapon leveling isn’t the only thing you will have to grind for in the game. Mana and HL are just as important. Both are obtained from clearing stages so you will often find yourself having to redo episodes or Item World stages, collect bonuses and sell unwanted awarded items. It sounds monotonous but each item has its own world and set of enemies, opening room for a thrilling experience.

Most of the English voice acting is excellent in this game. They fit in with the characters perfectly. An energetic and slightly dark tone for the vampire, a cold and manly voice for the werewolf and a macho voice for the human fighter as some examples. Unfortunately the same cannot be said for one of the major villains from the main story.

Thanks to the ability to skip cutscenes, you wouldn’t get tired from rewatching the cutscenes after defeat. Not a fan of repeatedly pressing A to listen to the voice acting? Not a problem either! An option for fluid voice acting is available too.

The graphics are great for a game of this style. The attack scenes that get their own screen time aren’t top-notch but still pleasant to the eyes. Weapons have their own designs and are displayed on the battlefield when equipped. Some demons even have different color variations you can use through class promotion.

The soundtrack is nothing short of superb. It really gives off the underworld vibe. The music flows well with the cutscenes and gameplay. Random pirate encounters change the tone to something more upbeat.

The game doesn’t end after completing the main story. There is a lot of additional content such as cutscenes, battles, playable characters and stores to unlock. The battles start off easy but will get much tougher. A lot of grinding will be needed to keep up, much more than what was done for the main story. You may also find yourself taking more advantage of calling for Senate sessions.

Disgaea 4 Complete+ is a fun strategic game that’s a bit heavy on the grinding side but packed with a load of content and full of hilarious scenes. The game will have you engaging in many battles, building up characters, making new characters to train, and fighting the opposition at the Senate Hearings.

Not exploring every area of your base can mean the end of your regime. It can even make you waste more time grinding than you need to. You’re left to figure out some things on your own when you’re stuck on a powerful foe. Defeating a boss with HP on steroids is one of the most satisfying things to experience but the blindspots on some maps are bothersome.

If you enjoy strategy, interesting characters, comedy and a lot of grinding, you’ll absolutely love Disgaea 4 Complete+. It has a lot of content to keep anyone occupied for days.