The question “What does a video game have to have for you to appreciate it?” can have several different answers. If you asked most of the younger generation today, they would tell you next-gen graphics and guns. If you asked adults that grew up with Atari and Nintendo, some of them may say “I’d appreciate it as long as it’s a good game.” These are two very different answers, but I happen to agree with the second one. As long as a game is enjoyable, does it really matter how fancy the graphics/effects are?

I mean come on. I can find myself playing a game of ‘Snake’ for hours; just any random version, merely because I find the game enjoyable. Heck, I still like playing NES/SNES games from time to time. Most of them never had an end, but score attacks are fun too! While I’m sad to say I didn’t actually grow up with that generation, and instead my childhood consisted of the N64 and the Gamecube, I can say that I still very much so appreciate the NES/Atari and the other ‘legend’ consoles that helped to get video games to where they are today. And clearly, so do the guys behind Dot Arcade. 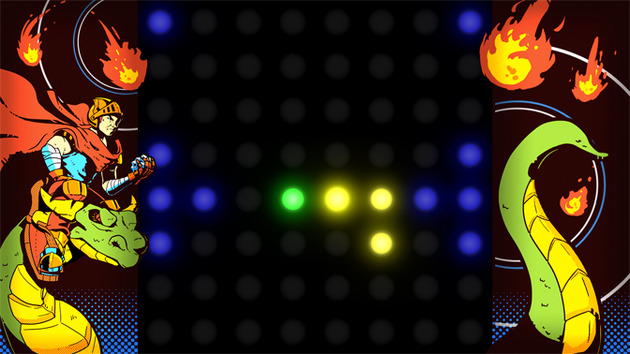 Dot Arcade is a collection of 3 dot-filled games that most of us should be familiar with. The games themselves aren’t new concepts, rather, they are re-imaginings. It may not sound like much, because it isn’t. Not on the surface, anyway. But it’s what you do with these games and how much of an imagination you have that actually makes the experience of Dot Arcade enjoyable. And yes, this was the developer’s intentions.

So let’s go through a brief introduction of the games. First, you have ‘Mr. Snake’ (it doesn’t take a rocket scientist to guess which game this is based off of). The gameplay is simple (well, all of the games are very simple, but I felt the need to point that out again). If you’ve ever played Snake, then you’ll already have some experience. ‘Mr. Snake’ is Snake with dots. You control this little dot that must collect the other blinking little dots in order to build your dot snake, while avoiding the blue dots that are falling/moving throughout the grid (the motion of the falling dots kinda felt like Space Invaders. Nostalgia alert!). As you collect more dots, it becomes increasingly harder to avoid the falling blue ones. But they did do something cool that I haven’t seen in many Snake games: you can actually move to the other side of the screen instead of just hitting a wall. By going to the far right/far left/farthest up or down, it actually takes you to the opposite side of the screen, so that your only challenge really is just avoiding the blue dots. 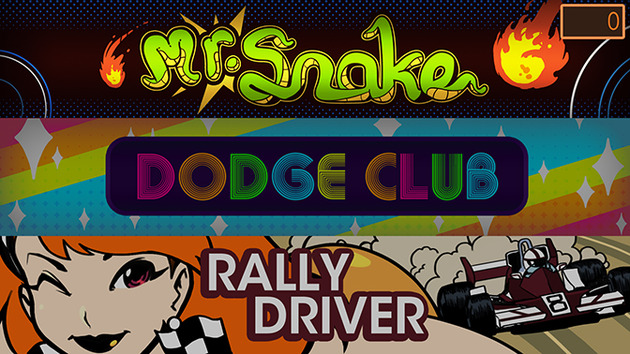 The second game is ‘Dodge Club’. It’s what it sounds like: Dodgeball with dots. You control a group of 4 dots (2 on top, 2 on bottom) and you must avoid another group of 4 dots and a smaller group with only 2 dots. Unlike ‘Mr. Snake’, though, you can’t go to the opposite side of the screen by hitting the edges, so it actually helps in this game. You must survive for as long as you can without running in to the other dots. Like I said earlier, they’re all pretty simple. But you don’t have to think of the things chasing you as dots. You can picture them as Space Aliens from Mars or play cops and robbers. That’s the goal of this game: everyone’s a winner as long as you use your imagination. So if you’re still sitting here thinking “Why would I want to play a game with a bunch of dots anyawy?”, then you probably have zero imagination whatsoever.

The final game, and my personal favorite, is ‘Rally Driver’. You control a pair of two dots, and you must move left/right to avoid the dots that are zooming past you as your speed increases. There are two rows of flashing lights on both side of the screen that blink faster the longer you survive. This is basically how fast you’re going. Sometimes the dots you have to avoid can also move a row or two, so it gets tricky as the speed increases (I recommend always moving toward a different direction then the one the blue dots are moving in). While playing this game, I didn’t think of dots. I was Batman, driving his batmobile, and the blue dots were the Joker’s minions. And every time I dodged one, I would yell “Wowee Zowee Batman!” because it made me extremely happy and I laughed everytime I said it. 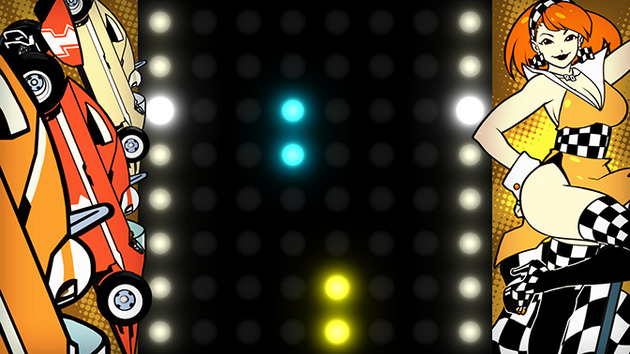 So you see, this small collection of minimalist games provided me with a lot of enjoyment and entertainment. It isn’t all about the fancy graphics and things that we have in games these days. It’s about the love of video games in general, and using your imagination to enhance the overall experience. That’s what the devs aimed to do, and that’s exactly what they did. I understand that this type of thing may not appeal to everyone, and it was a bit of a risk to release something this ‘small’ on the eShop, but as I mentioned earlier: it’s only small on the surface. Dot Arcade can be as big as you want it to be. You just have to believe!

I’m giving Dot Arcade an 8.5/10. There are only 3 games, and while I hope that there are more planned for the future, and I desperately wish to give this game a higher rating, I can’t give it higher than an 8.5 because of the small content. However, regardless of how small the content supply is, I can definitely recommend this game to anyone with $5 in their pocket. Dot Arcade fantastically delivers a retro experience that others would have a hard time recreating.