Dusk Diver is a flashy Beat ’em Up with an urban fantasy setting. The developers, JFI Games and Jera, opted to give their game a traditional anime style. And when we think of anime style, our minds directly go to Japan. This time, for a refreshing change of pace, the game is set in the Ximending District of Taipei, Taiwan.

In Ximending lies one of the many points of contact between the human world and the spirit dimension, Kunlun. These two worlds are separated, but now the barrier between them has weakened. And that’s when an ordinary high schooler, Yuno, accidentally gets into the breach. She makes contact with one of the guardian deities of Ximending, Leo, and partially absorbs his powers. At the same time, the Chaos Beasts that inhabit Kunlun attempts to break into the human world. With the divine powers at her disposal, Yuno will help the Guardians to defend Ximending from the increasingly vicious monsters. 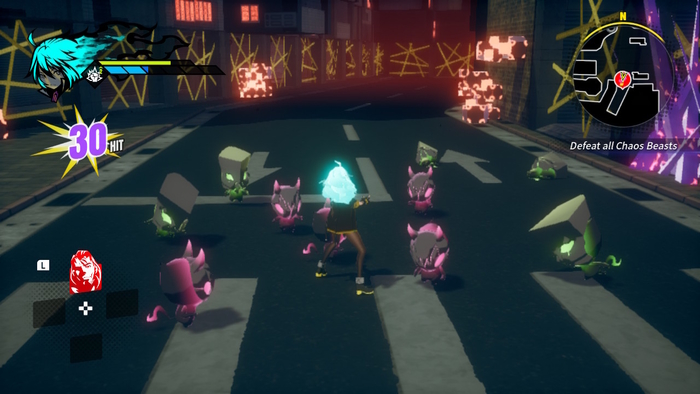 This more or less is the initial premise of Dusk Diver. The game follows our protagonists’ attempt to unravel the mystery behind these strange occurrences. All while helping the citizens in their daily struggles.

The plot is simple and linear but overall functional to the whole experience. It manages to create a sense of mystery that engrosses the player. Why a goofy ceramic bear hosts a powerful deity? What caused this multidimensional incident?

Characters follow standard anime tropes and don’t really stray from them. This, however, doesn’t prevent the player from enjoying the bantering between Yumo and the Guardians. The main cast is in fact really likable and offers an interesting commentary to the game’s events.

The game is divided into chapters. Each of them comprehends one or two major battle sequences fought in Youshanding, the Kunlunian version of Ximending.

A good part of the game is spent in the human world, with Ximending posing as the game hub. In there, Yuno can freely move around the city. Here the player can indulge in many side activities. Yuno can eat at the various local restaurants for stat boosts and to increase her friendship with the Guardians. There are many sidequests available, in which Yuno can help the citizens in various ways, from retrieving stolen luggage to advertising a new store. Gacha machines dispense some nice bonuses to the player such as artworks, music tracks, and new costumes. 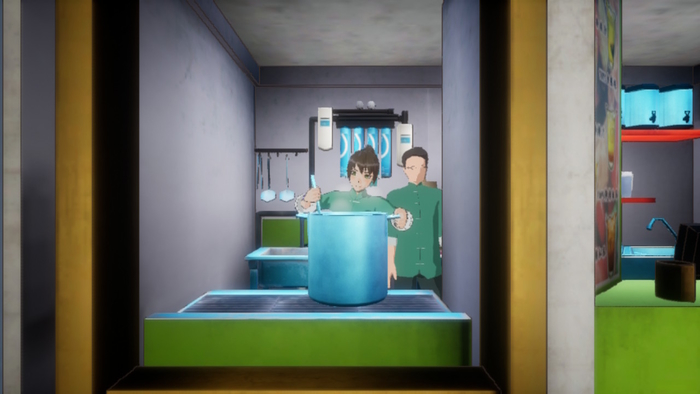 Many Dragon Stone Shards are hidden throughout the streets of Ximending. They are really important to the game’s progression. A set number of them is necessary to access the plot-related Dimensional Rifts. This is an overabundance of them, though, so the player can progress at their own pace without worrying too much about being short of them.

The exploration of Ximending is probably the best part of the game. The city is brought alive by a great number of pedestrians sparse in the streets, whose conversations can be overheard by Yuno and that changes accordingly to the game’s progression.

Combat is obviously the core of the gameplay. As said, battles take place in Youshanding and have a Stage structure. Each Stage lasts around 10 minutes. Their layout isn’t particularly complex since it mirrors Ximending’s, but some Stages have light puzzle elements. There’s a flooded level where Yuno has to avoid falling in the water. A level with platforms that develops in a vertical direction instead of the usual horizontal one. This keeps up the player’s attention, that otherwise would have drifted away due to the simple design.

The player’s performance is rated at the end of each Stage and rewarded accordingly. The rating system isn’t particularly complex since it’s only based on the completion time. The player can also find Dragon Stone Shards hidden in each level.

In this structure lies the main issue of the game. Exploration is vital because of the hidden Dragon Stones, but at the same time discouraged. Losing time wandering about drastically decrease the rating. Therefore it’s difficult to perceive a Stage as ‘completed’ the first time it’s done since something will be missing, be it a good rating or a hidden secret. 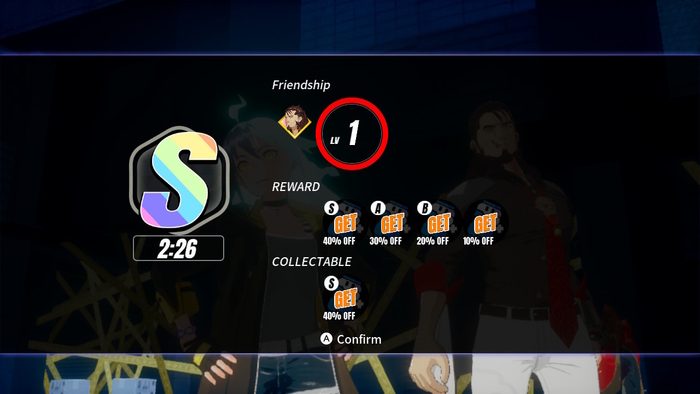 It’s possible to increase Yuno’s and Guardian’s stats with Skill Points obtained after each Stage. This is important since it unlocks new moves for Yuno and strengthens the initially weak Guardians.

YUNO KNOWS HOW TO FIGHT, SHE SAW IT ON TV!

Yuno possesses a weak and strong attack. It’s possible to chain them to create combos. A longer combo increases enemies’ drop rates of consumable and therefore facilitates a lot the combat experience. A lock-on function is available by pressing the Right Stick. Yuno can dodge attacks with ZR. A well-timed dodge activates a Just Dodge moment. During this time frame enemies slow down, SP is replenished and the player can destroy the foes without any chance of retaliation. To prevent the abuse of this system, there is a cooldown time between two Just Dodge moments. Therefore, it’s fundamental for the player to time it well to avoid harmful situations.

Yuno’s attacks don’t have a wide range. It can take forever to even beat the weakest enemies since she can’t engage many of them. If the player were to only have Yuno’s moves at their disposal this would have been a really boring game.

Luckily, she can summon the Guardians to help her fight.

Pressing A button summons a Guardian. It’s possible to choose between them by pressing the corresponding Directional Button. Each summoning consumes an SP bar, but Yuno can recover it by defeating enemies with normal attacks. If the player has enough SP, Yuno will use a special move together with the selected Guardian.

The more Yuno uses a Guardian in battle, the more the TP gauge fills. When it starts flashing it’s possible to enter D.ARMS mode. It’s a time-limited enhancement to Yuno’s and the Guardians’ stats that can be interrupted at any moment to use an incredibly powerful finisher. 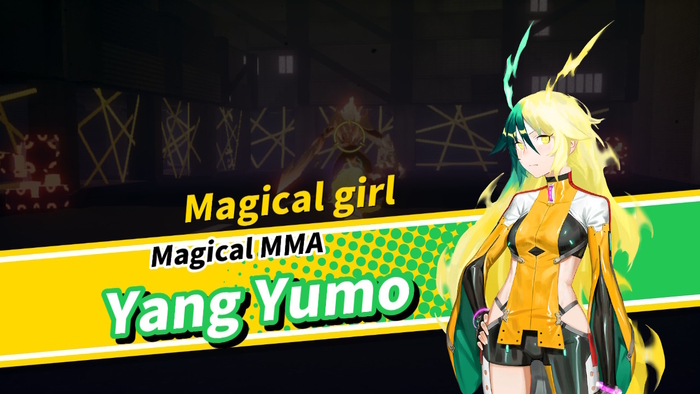 Each Guardian has a Friendship stat attached to them. Yuno can strengthen her bonds with them both in battle and by consuming their favorite food. Each Friendship level brings a new combat move and unlocks a new scene with them. These skits usually take place in their favorite restaurants and give the player new information about their backstory. It’s interesting to see how the Guardians’ relationship with the city they protect is and not only their connection with Yuno.

At first Guardians’ usage is really limited since Yuno doesn’t have much SP. Once the player increases her stats the game becomes more dynamic. In the final chapters of the game, it’s easy to chain combos of 500 attacks or more and that’s when the combat system becomes really satisfying and dynamic.

It isn’t a really deep or complex combat system but considered how short each stage is, this doesn’t pose a real problem. Even bosses, who have a lot of health, aren’t boring nor drawn out since Yuno has the means to deal huge damage and end the fight in a few minutes.

The overall difficulty is pretty low and this might turn off the most experienced player. Luckily, this objective easiness is counterbalanced by the considerable damage Yuno can get even from a single enemy’s attack. This way, a game that otherwise would have been a button smashing fest require the player to pay attention to how the foes move.

The game uses a cell ceding style to represent both the main cast and the Chaos Beasts. Character design is pleasant to the eyes and spot on. Ximending is rendered well and with a ton of particulars that help the player immersing themselves. To avoid performance issues in town, NPCs are represented as textureless silhouettes. While this is mainly a technical workaround, it really gives the impression of being in a big city where it’s impossible to know and distinguish anyone. Youshanding has a daunting and ethereal atmosphere, with deep blue and strong red hues and flashy lights. The same colors are given to the Chaos Beasts, creatures out of this world. 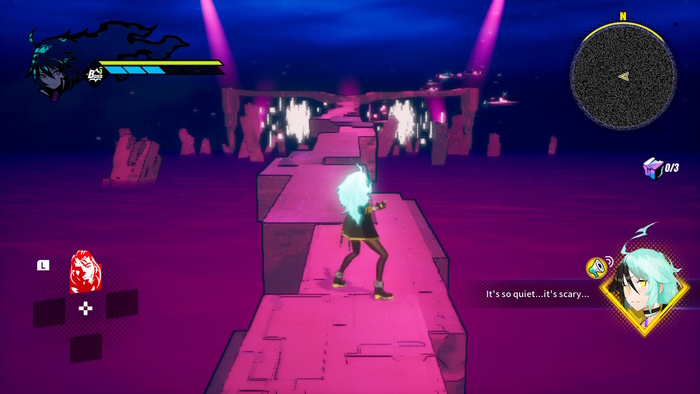 The only problem the game seems to have graphic-wise is an excessive blurriness in Portable Mode.

The soundtrack doesn’t have many strong tracks and the player will not pay much attention to it most of the time. Still, the only two vocal songs accompany well respectively the final battle and the credit sequence.

The game is fairly short since the player can finish the main story in around 10 hours. Once the credits roll, there isn’t any post-game related content. Still, it’s possible to return to Ximending and conclude any unfinished business. Each story mission can be replayed to improve that Stage’s Rating and get the rewards missed during the storyline. The player also unlocks a harder version of that stage once it’s completed.

Completionism isn’t rewarded well in the game. Repeating each mission for that S grade is a boring task. After all, the Stages feel incredibly simplistic if the player already went through them once. Moreover, hard mode simply consists of an increment in enemies’ stats. Too bad it’s mandatory too for a 100% completion.

Overall, Dusk Diver is a rough diamond. The parts set in Ximending show great care and are incredibly entertaining. Combat, on the other hand, would have benefited from a more daring approach. It’s the developers’ first game and it shows but it’s a great start nonetheless.

It’s a recommended title to players who want a fun and short experience who will not stress over that 100% but prefer to lose themselves in side activities.