Who would think that old-fashioned dungeon crawler RPGs are still admirable today? Back in 2013, Atlus released the fourth installment of its series to West – that is, Etrian Odyssey IV: Legends of the Titan. What did make Atlus consider Etrian Odyssey release in these days? I haven’t tried the previous EO series before, so I’m interested to find out what kind of gem Atlus wants to present to their so-called hardcore RPG fans. 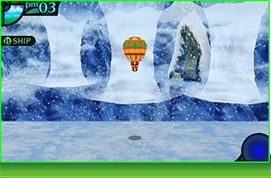 The story is not revolved around you and your party, since you are like everyone else: nameless guild without any background, trying to push into fame and fortune through missions accepted in Tharsis, the city where you start your journey off. Seen but untouched, Yggdrasil Tree has been standing far away from Tharsis, and the Outland Court asks us – among the other guilds – to pave the way to the root of all lives and unveil its secret.

You are free to build your guild with seven starting classes, from warrior-like Landsknecht to defense-tanker Fortress to party-buffer Dancer. Three latter classes will be added throughout the story, also subclass feature. Though your party can only be filled by five persons, you can make more than twenty units to experiment and mix. 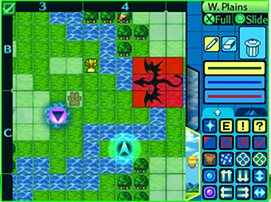 The world you will explore is divided into two sections: overworlds and labyrinths, from a first-person perspective. Starting from Tharsis, you will take your first step with your airship. Map-drawing on your 3DS touchscreen comes handy to your journey. You can draw the contour of the land, pathways in the labyrinth, or add notes on shortcuts and gathering points. Lancarse has been helping Atlus on dungeon programming in the series, as well as in Shin Megami Tensei: Strange Journey and Shin Megami Tensei IV.

There are Formido Oppugnatura Exsequens – or FOE for short – scattered both in the overworld and labyrinth. They are different from random-encountered enemies since they are seen on your map with special mark. They act as miniboss – stronger from any random encounter you will meet in the specified area – and will chase you in different patterns. Here comes the interesting puzzle of Etrian Odyssey series: you may choose to face, escape from, or lure them to certain place to access previously closed area. 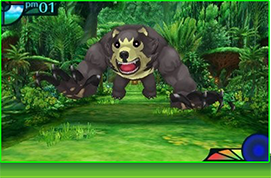 Battles are completely turn-based with grid setting, both your guild and the enemies. Determining which unit to place in the front and the back affects your success. Tech Point is the important aspect in battle, since you will need that to use skills and there is no way to replenish it except sleeping in the inn – at least early of your game. I personally use skills only when really needed, such as fighting against FOEs and bosses. That’s why finding shortcuts in the labyrinth may help you to cut time while reducing random encounter.

There are two interesting aspects that will help you through the self-proclaimed difficulty level of Etrian Odyssey series, also in Legends of the Titan. First, Skill Point distribution. By leveling up your units by one, you will gain one Skill Point. This will be used to spend to access new skill or develop the skill you have learned before. Throughout battles, you might feel that your learned skills are ineffective – and voila! Atlus lets you to redistribute all of your Skill Points at the cost of decreasing the unit’s current level by two. 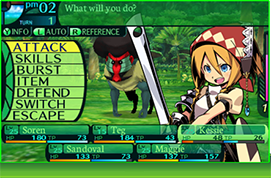 The second aspect will be used in battles: Binding. Sniper and Arcanist are the classes able to use this skills, and though no detailed information given in the game, you will learn how Binding is effective through experimentation. You can bind three parts of the body, consisting of Head-Arm-Leg. Binding certain part of the enemies will affect how they behaves, such as cancelling their spells and/or attacks. Also, defeating enemies while their certain part bound will prize you a special loot.

Etrian Odyssey IV might not tell you a strong story like other RPG story that is revolved around characters – one of role-playing games’ most appealing elements. But throughout labyrinth exploration, you will learn the relation of human and Yggdrasil Tree, how it ended before, and your task – as the part of mankind – to reconcile. You will love the departure of 2D to 3D-modeled enemies and how they pop out to your screen while attacking, though the labyrinth’s texture is still so-so. Not bad, but not good enough since you might be bored eventually. Last but not least – maybe the best – Yuzo Koshiro comes back as the composer, bringing vivid jazz-to-orchestra-to rock soundtracks you and I will really love. And though it’s not a game for everyone, it is a strong base for hardcore RPG fans. Since the Etrian world is always, larger than you.