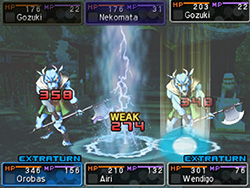 NIS America is very nice to handle another Atlus European games’ release, and you impatience will be put to rest since they have announced the release dates for Devil Survivor 2: Record Breaker, Etrian Mystery Dungeon, and Etrian Odyssey 2 Untold: The Fafnir Knight.

The first two games were released in North America, while the latter is an upcoming game for both regions. Devil Survivor 2: Record Breaker is set for European release on October 30, and that would be a nice time for a demon-summoning strategy RPG. European gamers will be exploring Etrian Mystery Dungeon from September 11, while Etrian Odyssey 2 Untold: The Fafnir Knight will follow on February 16, 2016.

You may shake your impatience off by reading our Etrian Mystery Dungeon and Devil Survivor 2: Record Breaker reviews.