There are two kinds of gamers – those who don’t mind grinding, and those who despise grinding. Certainly no one loves it; at least, I hope not. But those who play dungeon crawlers don’t mind all that much, because they know what to expect. Excave actually forgoes some things which are a given in roguelike RPGs, and it’d be more appropriate to call it a roguelite RPG.

Excave seems to have a story at first: in Imperial City an underground labyrinth that once served as a laboratory starts spawning monsters one day, and the king asks adventurers to go deeper and deeper into the labyrinth to find out what’s wrong and rescue the magician there. Beyond that, the story takes the backmost seat and for the most part of the game, is told through notes that the player finds in the dungeon. It’s almost depressing to see the story being told like this, because these notes comprise nothing more than a short sentence and don’t affect anything at all, other than taking up space in your limited inventory. You can sell these notes for a decent price, too; they don’t even count as key items. There is no dialogue, no cutscenes of any sort, not even any real characters besides the two adventurers you can play as and thus, no real story to speak of throughout the game. It might as well have been ‘go explore because you’re a dungeon explorer.’

You can play as one of two characters – a boy and a girl – and change them each time you return to town. Even at the blacksmith’s or in the item shop, only your chosen character is shown; there isn’t even a blacksmith or shopkeeper character. The character art was decent, but how much can you praise it for just two characters? Anyway, both characters are different in the sense that the boy can equip heavier weapons like axes and spears, while the girl can equip weapons that are specialized for quick or ranged attacks, like rapiers, bow-and-arrows and a mage’s staff.

Once you choose your character, you can sort their inventory by selecting the Equipment option while in town. Here you can sell items, put them or storage or move items from storage into your inventory. There are only sixteen slots in your inventory, plus five slots for items you’ll have in use (a weapon, a tool and three accessories), and everything – medicines, weapons, keys – take up a slot of their own, so your inventory is extremely limited. Even multiple items of the same kind don’t go into a slot together. Even key items and, believe it or not, tutorial notes at the start of the game, take up a slot each. Since a lot of the game revolves around picking up loot in the dungeons, it’s annoying to have so little space in the inventory and I constantly found myself having to trash weapons and items just to pick up key items or more loot. Frustratingly, you have to move a key to the Tool slot before being able to use it at a door, instead of it being used automatically.

As for the dungeons themselves? They’re not randomly generated (roguelite, eh?), but they’re serviceable after the first one; the first dungeon gave a bad impression. The enemies in the first dungeon, apart from the occasional wasp, are coloured blobs that look like clumps of Play-Doh. Fortunately the enemy designs get more interesting from the second dungeon onwards, even if they’re repetitive in their unholy clusters.

The controls are fine. You use the A button to attack, B button to use a tool (like a shield or a spell – spells can be used only once) and the shoulder buttons to hold the character’s direction so you can strafe. You can exit the dungeon at any time by pressing and holding the X button.

You use the touchscreen to sort, select and use items. A cute aspect of the game was that you could use food – which gives stat boosts – and medicine by directly dragging it to the character avatar’s mouth on the touchscreen. Often, using the touchscreen for items while trying to combat enemies on the upper screen proved to be cripplingly arduous. 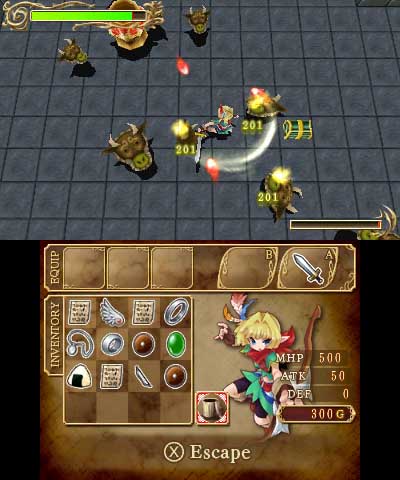 Combat is simple but passable. The lack of flow was bothersome (you can’t attack while moving, which defeated most of the purpose of strafing) but it wasn’t bad. Boss battles were all right too; most of the thrill came from ‘kill the boss before it kills you’ because the simple combat lets it go either way. Surprisingly, there’s no levelling system in Excave – that’s one of the givens of RPGs that this game omits. The only stat upgrades you get are through accessories.

Graphically, Excave is similar to a PS1 game. The character models and later enemy designs are fine; the dungeons are servicable. As said before, the lack of character art was disappointing, although the character art was good in the minuscule amount there was. The music is forgettable but isn’t strident and gets the job done. The localization is decent but there are some mistakes in the opening’s text.

Excave has the potential to be a good game, but its many small frustrations add up and it doesn’t satisfy. It wouldn’t interest most hardcore gamers, even, and for the rest it’ll just be a repetitive yawn.