Imagine holding a weapon of your choice in your hand or casting spells while guiding an army to victory or to a horrible defeat. That is mostly what Fire Emblem Awakening is about, besides the bonds that characters make and the wacky conversations they have.

The game gives you the option of choosing a gender, naming your character and giving you the ability to customize your appearance and voice. A couple more voice options would have been nice, however, it isn’t a major concern. 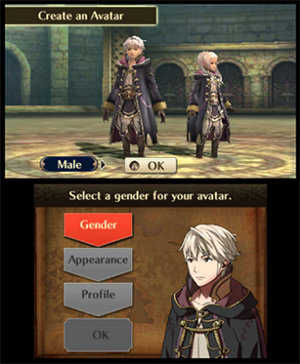 The battlefield is grid-based and characters are limited to moving a certain number of steps depending on their class. There are over 40 classes in the game and each class has different skills, strengths and weaknesses. The game also has a leveling up system where characters gain experience for attacking enemies during the gameplay and each character has health points where they are unable to play if it reaches 0. 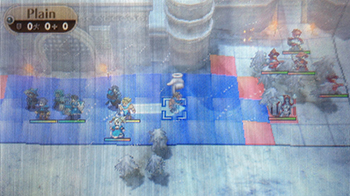 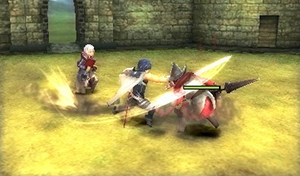 A short action scene animation is displayed when characters attack or heal each other during a stage. It’s a nice addition to have that will keep you entertained instead of only strategizing on the grid-based battlefield.

Learning how to play isn’t that difficult as you’re being guided every step of the way. The green tutorial text to the right can easily be missed, however, it isn’t really needed. As a matter of fact, I don’t think I even read a word of it on my first playthrough.

The gameplay is similar to Chess. It has you thinking 5 steps ahead of your enemies, especially if permanent death is turned on. Some of your characters may even be required to ‘take one for the team’ at some point during the gameplay. The game may even have you turning off your 3DS to save characters if you’re playing on Classic mode (permanent death) since there’s a good chance of getting attached to certain characters as time passes. After playing a stage over and over again, you may eventually get bored of the action scenes during battle, however, they can easily be skipped thanks to the ‘START’ button on the 3DS. That was a great implementation to the game that will save us time.

It doesn’t stop there. Characters can pair up with each other and build stronger bonds which also help them during battle (stats increase). As time progresses, they can eventually get married (male and female, of course). The conversations that occur along the way are both funny and interesting. Kids pop out as playable characters when a couple gets married but it’s done in a way to keep this a “kid friendly” game. 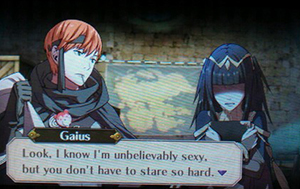 The game’s graphics are commendable and the 3D effects shine at certain parts of the game. When an area is snowing for example, it looks like some of the snow comes out of the screen which is actually cool. Some areas that you will discover later in the game are really beautiful and the console’s 3D feature will be put to good work during cutscenes and some parts of the gameplay. Voice acting is present, however, it only occurs fully during the cutscenes of the game. While characters converse with each other elsewhere (such as the still images, see photo above), you will only hear one or three words to start the conversation. Still, not a major problem and the conversations can give you a good laugh at times (in a good way, of course).

Some of the controls are easy to memorize once you get the hang of things and yes, they’re all comfortable to use. Looking for the bookmark/save option might be a little difficult to find when playing a stage, even if you have encountered it in the past. I experienced this by mistake and only remembered it after properly learning how to find it.

There’s a good chance you’re not going to listen to your iPod’s music while playing this game as well, not for your first playthrough anyway. The music fits in well with each situation in the game, from an exciting battle to a humiliating defeat. I have been playing this game for hours and so far I have not grown tired of its soundtrack.

The only real thing that this game lacks is online multiplayer where two players battle against each other with their armies. That would have been a great addition, however, the game is almost perfect without such a feature. Additional characters and chapters (both free and paid) are available via eShop which is pretty nice as well. The more content, the better.

If you want a game that will keep you on your toes and thinking 5 steps ahead of your enemies, especially with permanent death turned on, you should highly consider getting Fire Emblem Awakening. With good graphics, challenging gameplay, interesting character conversations, music that fits each situation well and replay value, this game isn’t something you should turn a blind eye to. I highly recommend it, especially if you enjoy playing Chess.