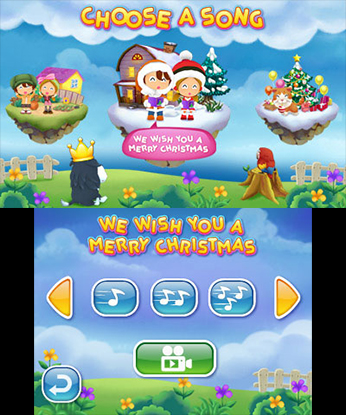 Two weeks after the release of My First Songs, RingZero Games was able to release the sequel to this music game for kids featuring another 14 popular songs and similar to the first title, the music selection is varied with nice songs.

Just like the first title, when you start the game you will see an easy interface with icons similar to a mobile game featuring really cute graphics. You can easily access the game’s basic mechanics, instructions or the achievements for those who are a little more into gaming (basically you earn them by beating each song on each difficulty).

All fourteen songs are unlocked from the start along with three difficulties, where each level plays the same way: a video clip is played on the upper screen and the gameplay is shown on the bottom screen including the lyrics. The player will see small buttons moving to a larger one, and depending on its color the action needed to do is described as follows: a blue dot means a tap, an orange bar is to hold and a purple one means to twirl the stylus around the larger button.

While there’s no timing system, you’re awarded a crown (a trophy) depending on how well you played once you finish the level, and there are five crowns: Jewel, Golden, Silver, Bronze and Wooden. 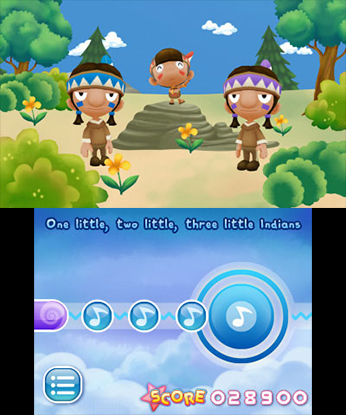 You can also buy it not as a game but as an app, since there’s a TV option allowing you to watch and hear the song without needing to play, making it a nice app. Of course, we don’t recommend to play it in 3D if the player is seven years or younger.

The graphical aspect is really nice for both the interface and the video clips, and while the models animations are quite simple, the quality of them and the art used for it is well done. The 3D effect is well done too; still is not a feature kids should use. The music quality is also great, and the voices are great not just for kids, but also for adults.

The presentation is really complete for this type of game, giving an easy interface, the videos’ compression quality is great (even better than some retail games) and the manual is really complete featuring the game’s instructions and even the songs’ lyrics!

Conclusion
As a game for kids it’s a great and cute game everyone can enjoy (even adults when they are with the younger audience). There’s indeed a small audience for this title (where it fits perfectly), but being honest, this is something anyone can grab.