Flapp & Zegeta is another clone of Flappy Bird on the Nintendo Wii U eShop, being the first title after SPIKEY WALLS from RCMADIAX.

By pressing a button or tapping the screen, you can fly to try and avoid the walls: if you touch one, you die. In addition to this, you will find coins you can collect and also the speed of the game will increase with the time.

The controls work well, however, the gameplay is broken: the height difference can give you impossible situations where it doesn’t matter how skilled you are, you will lose. Adding to that, it’s not impossible for the coins to appear inside walls which means you can’t get them. 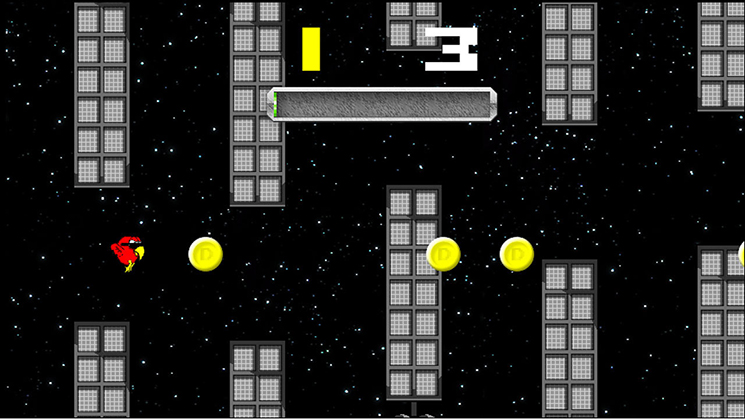 The difference of speed can also give you problems since it changes before you pass the wall, and considering this type of game is about replay value, there’s no leaderboard: therefore it’s basically losing and trying again.

The graphics of the title are simple and pretty limited, using pixel fonts for the text and a space parallax background. The soundtrack is limited to a song that loops forever and a small tune during the game’s introduction. The presentation is also lacking, there’s no highscore leaderboard and manual.

Conclusion: Flapp & Zegeta is a broken clone of a game already cloned on the Wii U eShop but for five times its cost. There is no reason to recommend it. If you want a clone, buy SPIKEY WALLS, it’s simple but not broken.