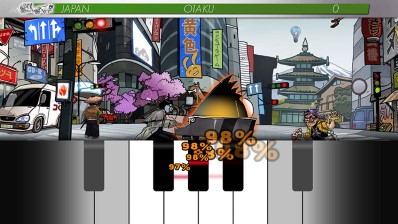 GAMEPLAY:
Frederic: Resurrection of Music (FRM for short) is a rhythm musical game where you use the Gamepad and its tactile screen. The gameplay of FRM is actually quite simple, where it plays like a tactile Guitar Hero game (the only example I know to compare it with) but with a piano.

In every song battle, there are seven different key notes. Four of them are white and three are black. There are also different gameplay hints that allow you to play the game better: black notes will reach black keys and white notes the white keys.

The keys will also glow with a specific color when they are reaching the keys:

When doing a combo of Blue and Red notes, you will get bonus points (being informed with a voice). You can also get bonus points by not failing notes with the multiplier (located in the left side of the screen), where it will increase every ten notes you hit in a row, being able to win up to five times the points you would get without it. Lastly, there are two more types of notes:

By playing well, and that means hitting the notes, you will fill a little bar called “Power Indicator” (in the upper side of the screen), where it shows if you’re winning or losing the level. Once the level ends, and the green part represents more than the half of the bar, you will win and be able to progress in the story. 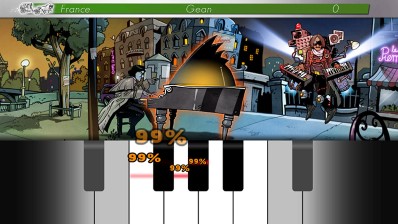 There’s also a special attack that appears sometimes, being represented with an icon. Once it appears, you need to shake the Gamepad to activate. Meanwhile the instructions say you need to do it gently, I actually recommend to do a fast big shake to the controller, due the sensibility is quite low and also, you need to keep hitting the notes. Missing it won’t affect your bar or the multiplier.

The controls work really good, but there are two flaws: the low sensibility of the Gamepad making it hard to use the the special attack and when there are two notes at the same time. The Gamepad, being designed to use mostly with the stylus, doesn’t support the multi-touch feature, forcing the player to miss points.

FRM features a total of twelve levels, being nine of them for the story mode and three arena levels that can be unlocked after beating the game (one per difficulty, being Normal, Hard and Chopin). Meanwhile the game is short, the experience will be longer thanks to its replay value and the story the game contains. The game presents four different difficulties, the three I already mentioned and Easy, adding replay value to the game. Each level in each difficulty also has a three star ranking, being based in the game score where each difficulty has a different maximum score.

Meanwhile you’re beating the game, you have the ability to replay any level in the same and lower difficulty played. 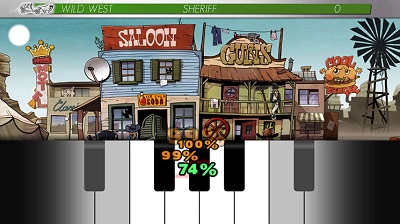 GRAPHICS AND SOUND:
FRM presents a comic art direction that is greatly done, featuring a lot of details in its drawing that doesn’t repeat in the game locations (you visit nine different countries in the story, including famous cities like New York, Paris, Moscow and Tokyo). Including the few animations in every level, the game also features animated comics as cutscenes, reaching around one hour of duration in total, being quite impressive. You can also watch the cutscenes again after they were shown in the story mode.

The soundtrack features twelve classical music remixes in different musical genres and the songs feature a great quality elaboration but they can be quite repetitive. FRM also has voice acting for the comics, maybe not the best but features a good quality in overall.

Being honest, this part is the main selling point of the game, seriously, there’s a lot of work here.

That doesn’t mean it’s perfect because there are three flaws: The first one is actually small, a little bug in one of the levels that makes Chopin not appear in the screen, something you will care about. The second one is important because there is no audio output in the cutscenes when playing just with the Gamepad, and the last flaw is when you’re playing with the TV, where the special animations (including the super attack one) only appear on the TV screen, so watching them will distract you from the screen. 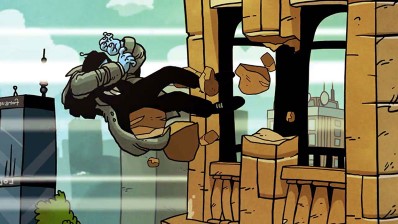 PRESENTATION:
The presentation is superb, where it features an excellent manual and in-game explanation, a complete and user friendly menus and interface, replay value, a nice quantity of songs, well, it’s a good presentation in overall.

Sadly, the presentation is quite broken due the flaws I made mentioned before, like the lack of sound in the cutscenes when playing in the Off-TV mode.

CONCLUSION:
A great inclusion to the eShop, presenting a quality product with great comic graphics, music remixes and a nice gameplay design for its price. Sadly, there are flaws that do not allow the player to fully enjoy the game. Still, an update is on the way, so get it because it is worth the money.

The developer confirmed that they are working on a patch to fix the problems I made that were mentioned in this review.