There are three methods in which characters can get skills in Fire Emblem Fates besides naturally leveling up.

Gaining Skills from My Castle Battles

The easiest method to obtain any skill for your characters is through My Castle battles. It sounds easier but some experienced players will give you trouble if you’re at a low level or lack good equipment/skills to rival their strength in combat.

Rest assured, after defeating them or seizing the throne in their castle with no handicap, you will be allowed to choose one skill from one of their characters from the battle for the same character in your army to learn. The catch is paying a small amount of gold to teach your character the chosen skill, therefore you should not head into a My Castle battle expecting to get a skill if your in-game wallet is empty. 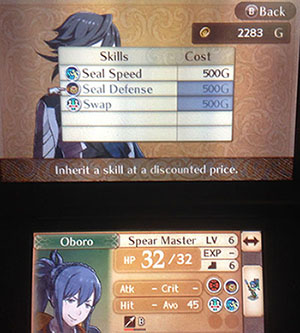 In addition to purchasing an enemy’s skill after defeating them in this type of battle, the character who you purchased the skill from will show up in your Unit Logbook to purchase additional skills at a later date. All you’re required to do is talk to Felicia in your castle and select Unit Logbook, followed by the character you want to purchase skills from.

Gaining Skills from Re-classing and Leveling Up

This is one of the best ways to obtain skills from other classes if you lack Wi-Fi. Depending on the class of your character, you will learn a new skill at level 1, 5, 10 or 15 (it depends on the class you choose). You can use one of the seals available in the game to change the class of your character and level them up so they learn the skill from their promoted class. Even if you missed the required level to learn the skill, once the character can progress in level, they will obtain the skill after their next level (even when they are in the advanced class).

Passing Down Skills from Parents to Kid

Re-classing and purchasing skills from My Castle victories are not the only methods to obtain new skills for characters, however, they are the only skill obtaining methods that are not exclusive to kids in the game. Parents are capable of passing down skills they have learned to their kids when starting their paralogue and you can keep reading to learn how it works.

How passing down skills to kids work :

The kid character inherits the last skill in the parent’s six skills slot.

Sophie is the kid of Silas and Mozu from my Birthright playthrough. She inherited Underdog from Mozu and Elbow Room from Silas. Her class is Cavalier (got it from the father) and she is above level 10, therefore she obtained the skill Shelter due to the high level in her current class.

If Mozu’s Aptitude skill was the last skill in her six skills slot, Sophie would have inherited it instead of Underdog.