Back when I played Fire Emblem Awakening, as soon as I discovered magic in the game, I wanted to be a dark mage. It was no different in Fire Emblem Fates when I picked up my copy of Birthright. Unfortunately, Hoshido lacks magic classes. The best you might find playable are Diviners, Onmyoji and Basara if you want the physical attacks. Instead of tomes, they make use of scrolls to summon spirits to the battlefield.

The only way to get a Nohr class in Birthright is through one of the following characters :

In addition, a character’s child from the list above also inherits a Nohr class by promotion from the use of a seal (eg. master seal).

How To Get Nohr Classes on Corrin in Birthright

When starting the game and making your Corrin character, you MUST choose the talent for the class you want. I chose ‘mage’ because I thought I could be a dark mage with Corrin (I was disappointed later down but it didn’t matter much because prince/noble is much better). 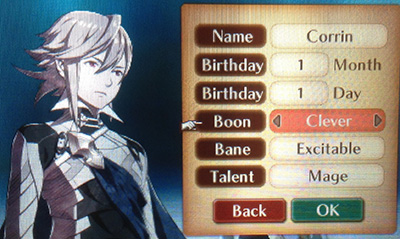 After choosing your talent, all you need is a heart seal and you can reclass into a dark mage or a sorcerer (assuming you chose the same talent as I did when setting up Corrin). You can reclass your Corrin to the class you want to by selecting the appropriate talent.

How To Get Nohr Classes on Characters in Birthright

You’re pretty much limited to the Nohr classes from the list above and the class of the talent you chose for Corrin when starting your game. The only way to transfer over these Nohr classes to your other Hoshido characters is by using a heart, partner or friendship seal.

Note: You must use a heart seal to get the Nohr class for the character in the list above.

Not all classes from the character list above will be available from the usage of a seal.

How To Get Nohr Classes on Kids in Birthright

This is the tricky part. It most likely isn’t possible to branch out of the class you get from choosing Corrin’s talent when starting the game unless you let Corrin marry one of the kids. The only other way is to let Kana pass the class to others by A+ or S rank support.

When I chose ‘mage’ as my talent for Corrin, it seems like Kana (Corrin’s daughter) inherited it. I was then able to get A+ rank support with Kana using Mitama (her father parent is Azama) and it allowed me to use a friendship seal to get the dark mage / sorcerer class after I changed Kana’s class to mage / sorcerer by using a heart seal.