GetClose is a local competitive multiplayer game for 2 or 4 players which uses a special control scheme to play: you need to share the same controller and you can only watch the TV screen.

The controls in this case are like this: each player controls his or her own stick (Player 1 will have the L-Stick and the Player 2 the R-Stick) and shot (ZL or ZR) or use an item (L or R) with the shoulder buttons. In the case you want to add two more players, a Wii U Pro Controller is needed, keeping the same controls. And don’t worry, the controls work flawlessly.

With that said, players are able to select two different modes with six maps each and ten different characters (the picture you see above). But what’s the difference between both modes? 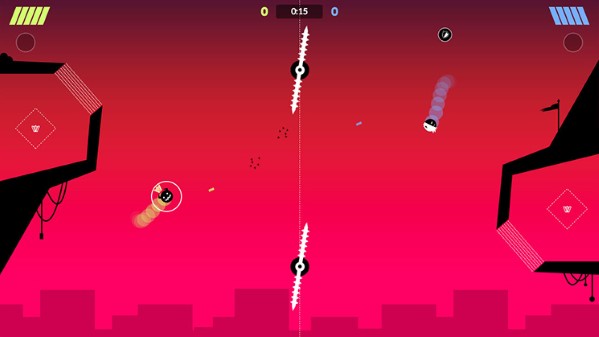 In Capture the Crown, you need to grab the crown and take it to your base in order and stay there for a moment in order to score. The first one to collect the score needed (1, 3, 5, 10 or 20, you can choose it) wins.

In King of the Crown, players need to hold the crown as long as possible, and since there’re no teams, you’re up against everyone. A little bar will be filled if you have the crown, and each bar means one point. Like Capture the Crown, the first player to collect the score needed (1, 3, 5, 10 or 20) wins.

During both modes you will find obstacles (places that make you move slower, walls, spikes and lasers) and items that will appear randomly: it can also be food that will add to your points for a special point meter that allows you to unlock stamps or power ups, most of them to attack the other.

The game’s graphics are really simple, using black and white objects with a reddish background for both the interface and the game, and it’s well made: it’s really easy to use. 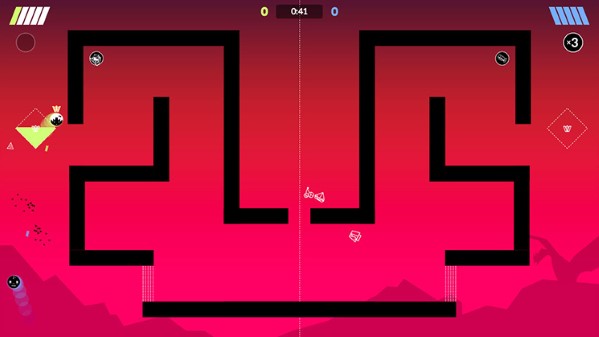 The soundtrack includes four songs: the winning screen, the title screen and one for each mode: you can actually listen to and download it for free here. It has a unique feel with modern and retro styles, but it gets really annoying with time… I recommend to listen to them if you’re considering its purchase, maybe you will like them.

The presentation is well done, and while it doesn’t feature Off-TV mode for the simple reason it would be useless, it has a great integration with Miiverse. It also has a useful quick guide and a little story in the game.

Conclusion:
Ignoring the quite annoying soundtrack, the developers did really nice work here and if you play games with your friends often, this is an interesting option to consider. It’s really simple, but also fun.