With the growing amount of puzzle games available on the Nintendo Switch, it’s important for new ones to stand out from the crowd. Glyph claws its way into the spotlight by combining nostalgic puzzle platforming movement with modern controls and physics. But is it a cave of wonder or should players leave it in the sands of time?

The plot centers on Anobi, a ball beetle citizen, waking up Glyph, the protagonist of the story; who is tasked to find the lost temple of Aaru. Starting from the tutorial, players are given tidbits of the lore of the world of sand. The narrative is tight, answering most of the player’s questions such as why the sand explodes Glyph when he touches it. 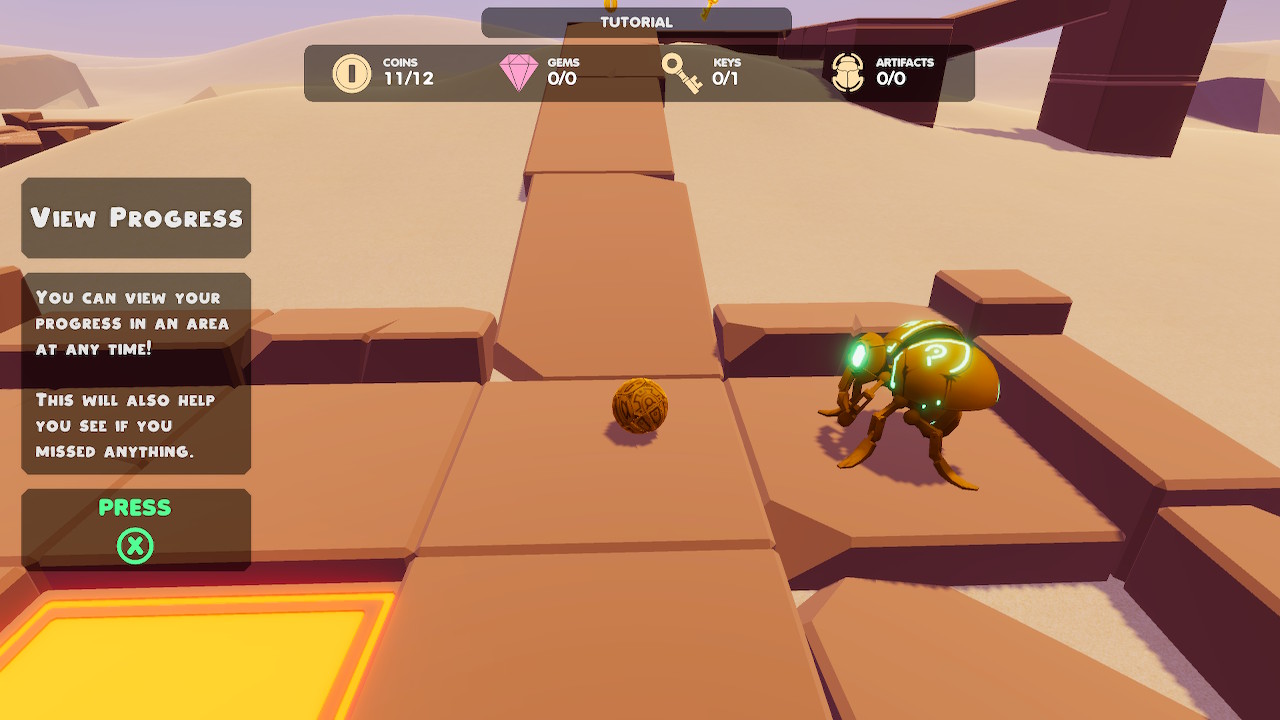 But overall, the story and dialogue are not anything to write home about. The lore is mildly expanded upon throughout levels but never becomes more than a way to define the gameplay. It becomes clear that this game is not about the story, it’s about the puzzles and fluid movement, with the story of the keys and temple just existing as a backdrop.

Puzzle gameplay is key to any title. Glyph is played with the control sticks to move the character and the camera. It’s a very sharp and precise movement. Sometimes ball physics-based games are too difficult because the movement feels unnatural, but this is not the case with Glyph. Rolling and jumping around with Glyph feels controlled and smooth. 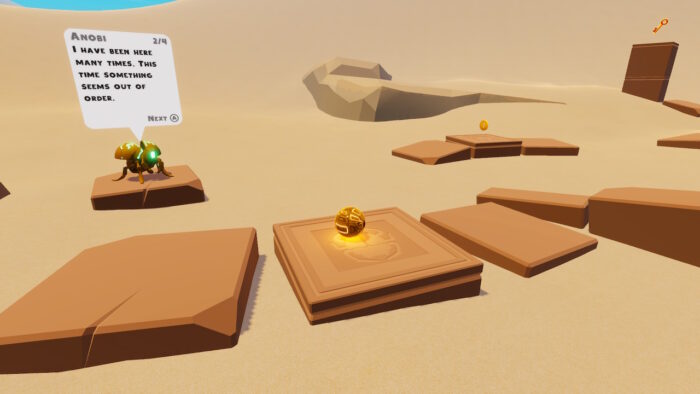 Gameplay is fast-paced and tests players’ button knowledge and reflexes. It also tests the player’s patience as there are no checkpoints between levels. Occasionally getting to the very end and being reset back to the beginning is frustrating. However, this is what makes Glyph a challenging title to master. This can be a title players pick up and play for as short as 15 minutes or as long as 2 hours.

The exploration in Glyph encourages players to find all of the collectibles and upgrades in each level. Getting sidetracked is very easy; playing around with the glides and trying to reach different areas can be quite tempting. Overall, the levels are unique enough to keep players hungry for more puzzle platforming. There are multiple ways to tackle a level and the game doesn’t feel like it forces players to complete every level with only one tactical approach, allowing for player creativity in how each stage is conquered.

The platforming elements in this puzzler are very well implemented. Classic and modern platforming elements are present, such as Glyph’s triple jump. The game admittedly feels pretty generic at first but the game mechanics help it stand out above the rest. The tutorial does a great job of explaining the various mechanics and can be replayed at any time in case players need a refresh.

There are a variety of collectibles to keep track of in Glyph, varying in abundance and importance. Coins are used as currency to unlock levels, so it is essential to find as many of them, if not all in the level. The player is also tasked with finding relics and gems to repair parts of the map in order to progress. The power gems are treasures found that restore complete areas of the Temple City of Aaru. These collectibles match the atmosphere Glyph creates, adding to the feeling of discovery. Collecting these treasures along with lost relics is the key to restoring the lost temple.

After completing the tutorial, the first levels are a breeze to get through. It doesn’t take long for levels to become a challenge.  Levels are rated out of 5 stars, with the difficulty increasing exponentially. The rating serves as a great warning for places, as tackling the higher levels unprepared can be quite frustrating. Additionally, these upper levels can easily eat up much more time than anticipated. Simply completing Glyph’s story will run you around 5 hours, but it takes much longer than that to unlock and discover everything. 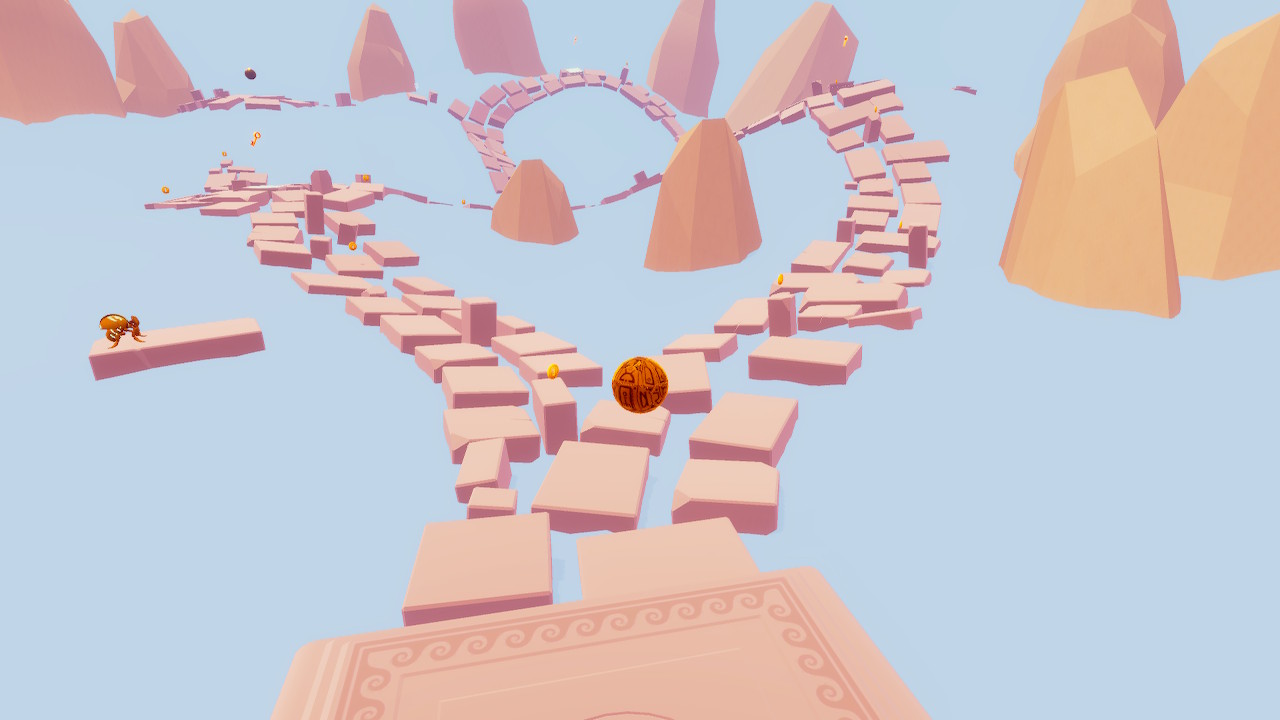 A huge part of the replayability in Glyph is the time trials. After finishing each level, the game times players. This is great fun because the game goes from Puzzle-Platformer to Puzzle Racer. Moving as quickly as one can to find the keys and unlock the portal back to the main hub is intense and rewarding. While the game does not have multiplayer, this works as a fun and engaging couch challenge. Trying to get the highest and fastest score will undoubtedly keep players coming back for more.

Glyph’s controls can be quickly summarized as easy to pick up but tough to master. The ball is very responsive to the player’s actions on the control stick; tilting aggressively will move Glyph faster while tilting gently is key for tough corners and areas. Pressing X will allow the player to view level progress at any time. This makes it easy to tell if you’ve found all of the coins or not in a level, aiding greatly in the quest for all the game’s collectibles. 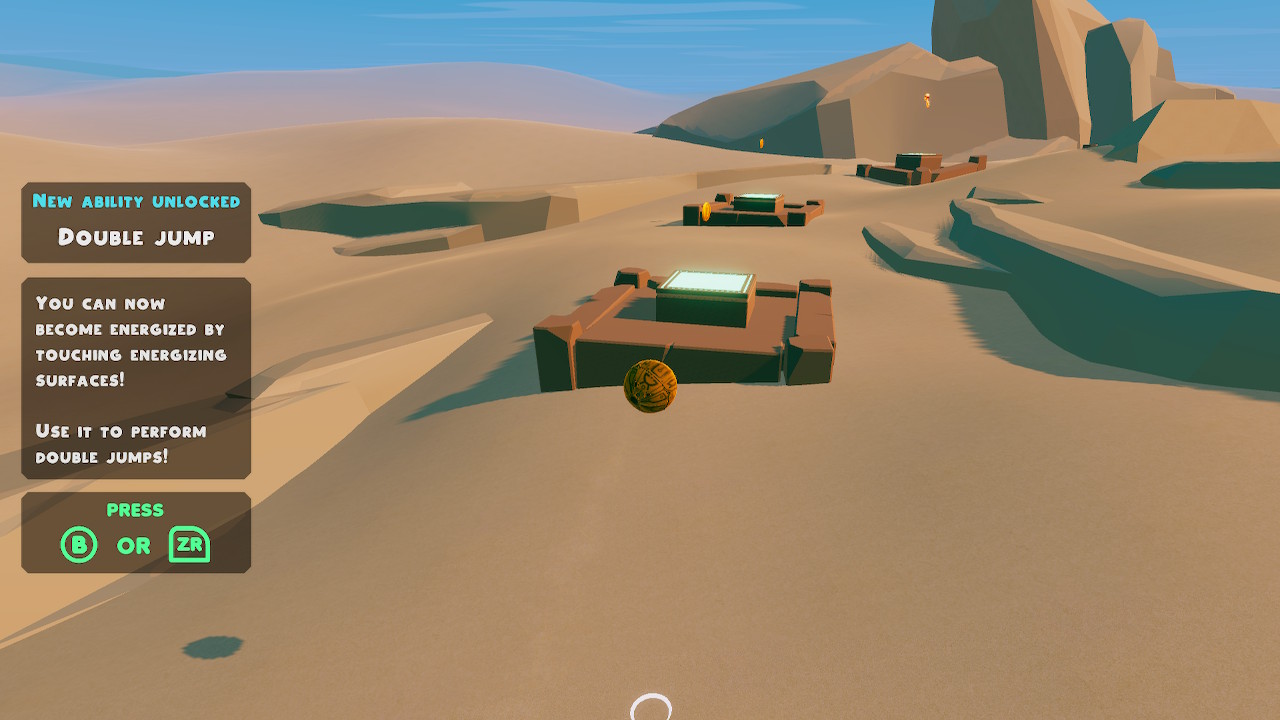 Pressing B or ZR will allow Glyph to generously jump. Jumping is not very touch-sensitive and takes some getting used to, but it’s a nice change of pace to the grounded ball puzzling genre. There’s also the ability to double jump on certain surfaces. This is where control gets a little hectic and the game does become more challenging, demanding that players find the flow of each puzzle. Additional abilities such as gliding further complicate the controls, but are essential to master to fully complete the game.

The music feels like a naturopathic massage parlor. It’s relaxing and soothing when the player is stuck on a tough level. It does occasionally feel tiring, with a high level of repetition or similar-sounding tracks. The graphics in this game are smooth and the textures look straight out of a retro Prince of Persia title. 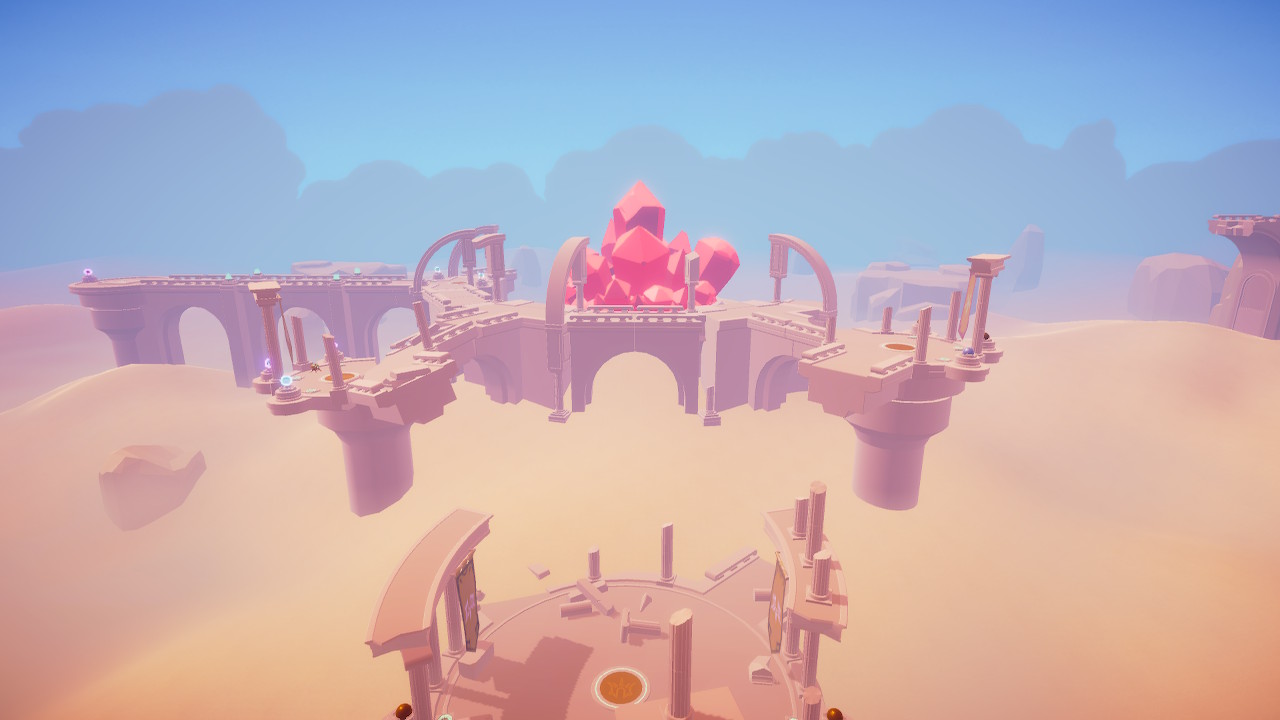 The 3D is good, feeling high quality for the modest CAD 20 price. The cartoony visuals are well suited to the game. The desert environments are picturesque and the framerate is very stable throughout. Overall, the visuals are very impressive, especially for an indie title.

One part of the presentation is the unlockable skins within the game. These are gained by finding secret switches and they do add to the presentation of the game. Customizing your beetle is fun, but it’s only a cosmetic change that marginally enhances the gameplay experience.

One area Glyph shines in is its replay value. There’s a variety of secrets hidden in the game, enticing players to come back for a repeat playthrough to catch something they missed. The game mechanics learned during the original playthrough are essential in replay discovery; something that seemed unreachable on a 1-star level becomes easier when you go back after playing a 3-star level. The time required to master the various wall movements also encourages players to return; there may easily be a switch you can’t reach without just a touch more practice. 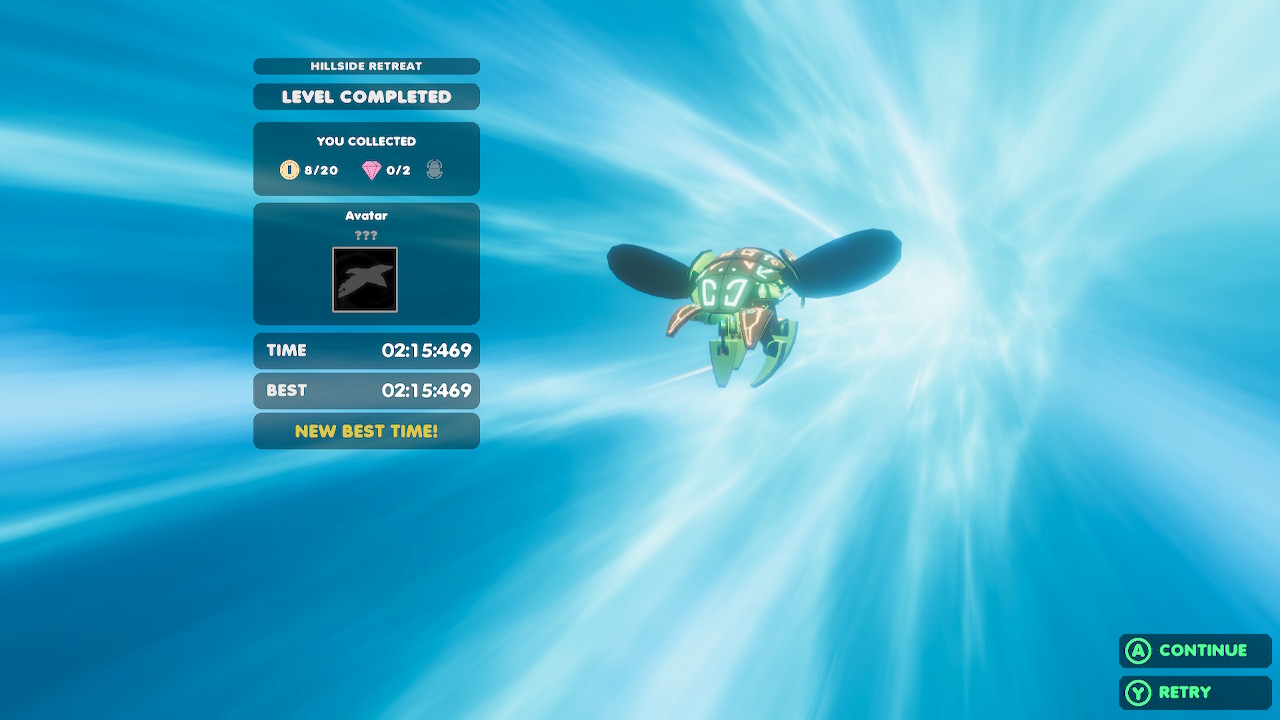 All and all, Glyph is a worthy entry to the puzzle platforming genre. Its tight controls, atmospheric presentation, and challenging gameplay will keep you hovering through the desert skies for hours. The only element holding Glyph back from being a masterpiece is the harsh difficulty curve, particularly with time trial levels, leading to occasional frustration. However, for those desiring a challenge, this is a perfect title to pick up and add to your collection.