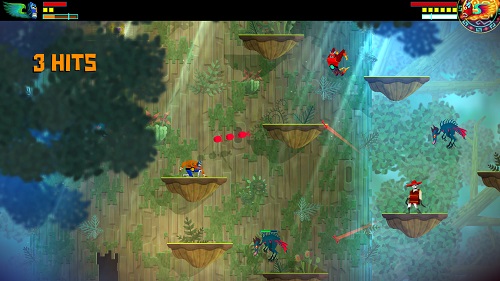 GAMEPLAY:
Guacamelee! Super Turbo Championship Edition, or Guacamelee! STCE for short, is a 2D “Metroidvania” that mixes the beat ’em up genre with the platformer one, creating a mix that works well. Add a lot of humor and stereotypical stuff there, and you have this game. For this type of game, I will explain in the shortest way possible.

In short, Guacamelee! STCE is like going from point A to B, getting a power up, going from point B to C, and it continues like that, presenting quite a linear story; still, the game features a large quantity of secrets and sidequests that will make you go back and explore, having big maps that gives the “Metroidvania” quality to the game.

The platforming is for when you have to go from point A to B, where you need to move around, using your skills to beat specific parts; some of them give a puzzle challenge, it’s like any other platformer in general. The beat ’em up side comes from the fighting system of the game, where you can find a lot of enemies; you need to beat all of them, taking advantage of your skills and moves, and also trying to get a bigger combo by evading their attacks. 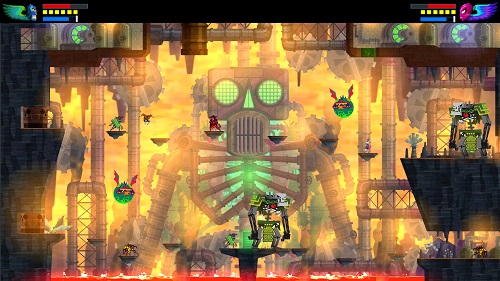 This part of Guacamelee! STCE is where this and the platformer part works together, due the upgrades and the power-ups you get in the game. The power-ups will give you special attacks, like being able to run up walls and special attacks that will allow you to break special blocks, allowing you to access more places you weren’t able to reach before. As for the fighting, those specific attacks can also help you to break shields the enemies can have, allowing you to attack them.

One of the power-ups you will get is the ability to swap between two dimensions, one “de la vida” (life) and the other of “de los muertos” (death), it’s like a day/night thing where both dimensions will present different styles, but also different elements. For example, certain places and objects will be available in one of the dimension, while they aren’t in the other one. This also applies when you’re fighting, allowing enemies to affect you in one dimension while they’re in another; the difference is they will be able to attack you but you won’t be able to attack them. 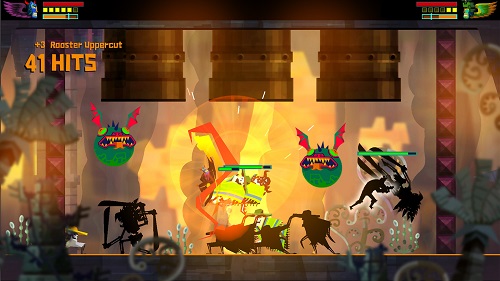 The upgrades you can find in the game are related to your stamina and health bars, where finding three pieces will allow you to make any of those bigger (a skull for stamina, a heart for health). You can also buy them with other upgrades (like faster recovery, stronger attacks, etc.), using the money you win by beating enemies, doing combos or breaking specific chests.

There’s also another currency, the silver coins, that will allow you to buy new suits (aka the DLC content) for any of the two characters available (Juan Aguacate and Tostada), where one of the new features of the game is being able to play as any of both characters. And yes, this means there is a two-player game mode, a cooperative mode, where you can play the story with a friend.

Guacamelee! STCE makes a good use for the GamePad, featuring the map for the screen, and the Off-TV play. The controls for the game are pretty good, even when it uses almost all the buttons: you jump with the B button, attack with the Y button, do a special move with the A button, grab with the X button, dodge with the R stick or the ZL button, shadow swap with the ZR button, view the map with the Select button, use the Intenso by pressing the L and R sticks at the same time and move with the L stick and the Control Pad. 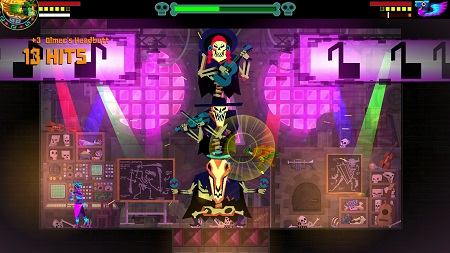 So what is new in this version of the game? The story is longer, where it includes new areas (Canal of Flowers and Volcano), a new boss (The Trio of Death), all the DLC content from the original release, new abilities (I will explain later), multiple save slots and a few new enemies.

So let’s talk about the new abilities. The first one is the INTENSO, a combat mode that makes your attacks stronger and faster, being usable when you fill the bar attacking the enemies, this one makes a big difference if you’re in trouble, but be careful because it drains really fast.

The second new ability is the “Independent Dimension Swapping”, or “Shadow Swap”, that allows both players (when playing in cooperative) to swap dimensions without dragging the other player, a lovely new feature for those who loves local multiplayer. And the third new ability is the Chicken Bombs, and yes, it does exactly the same thing the name says, allowing you to make bomb eggs when you’re a chicken. 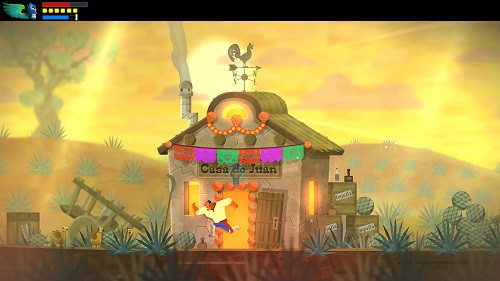 The game itself is quite short, during between 6 to 8 hours, of course, there are secrets, sidequests and more stuff that will make your game longer, or even, bring you back with the Hard Mode, giving some replay value but it still feels limited. Still, for the asking price, the game features a lot of content and a great quality, so the duration of the game won’t bother you at all.

GRAPHICS AND AUDIO:
The game looks excellent featuring smooth and high quality graphics for the entire game, offering of details and parodies. Those parodies are for movies, memes and game, and the list is really long. The only think I don’t like about a few animation is that they aren’t well looped, this being easy to notice, but that’s the only negative thing I can say.

The soundtrack also offers great quality with a lot of catchy songs, offering a good quantity of songs. Sadly, some of songs songs are quite short, being used in long sections of the game, so you can actually get tired of them when you play the game for long sessions. 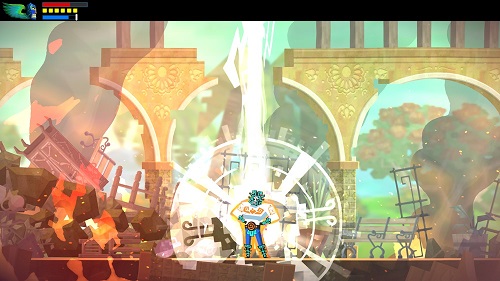 PRESENTATION:
The presentation of the game is great, presenting a good interface, nice use of the GamePad, an excellent explanation on how to play the game, nice replay value, a lot of secrets, a local multiplayer mode; well, it has good presentation in general.

The only negative thing I can actually say about the game’s presentation is its short manual, presenting just a little introduction and the controls’ explanation.

CONCLUSION:
It’s an example in how much quality an indie game can offer, and how good it can be at the same time. If you want an action platform game, and you didn’t have the chance to play this game before, get it, just get it.