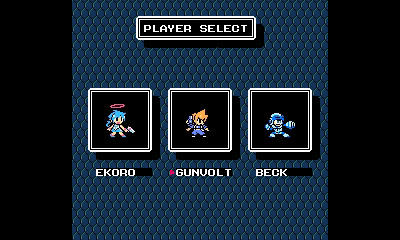 The Azure Striker Gunvolt is just a week away from being released on the North American eShop for 3DS and the developers have already announced another game to bring extra joy to the customers. IntiCreates has officially announced a crossover game of Gunvolt, Mighty no.9, and Gal*Gun. The new game is called Mighty Gunvolt.
Mighty Gunvolt offers a retro 8-bit look and an old school gameplay style. Different characters from above mentioned franchises will make their appearances in the game.

Best thing about Mighty Gunvolt is that it will be available on the eShop following Azure Striker Gunvolt’s release and anyone who buys Gunvolt will receive Mighty Gunvolt for free as an eShop download.