Are you a parent despairing at your toddler dribbling all over their Nintendo 3DS yet never learning? Before you decide to take away their console, drive them to depression culminating in a rebellious teenage and ruin their life, consider games like Happy Circus. An educational game that’s obviously meant for preschoolers (fellow 3DS Pedia reviewer Dilawer’s implications in having me review this were obvious) it both lets your tot learn how to spell and to realize that two plus two does not equal five; with its colourful presentation and easy, simple gameplay it also doesn’t make them suspect that they’re learning besides gaming.

Happy Circus does have a story told very unprofessionally (with a text smiley) in the manual, but in-game it’s just a couple of images and cheerful sounds since kids don’t really care who the evil monkey overlord they’re supposed to defeat in video games. Julie and Pierre come to a circus where the animals have lost their props. Julie and Pierre agree to find the props by going around the zoo and after that you start solving alphabet and number minigames. 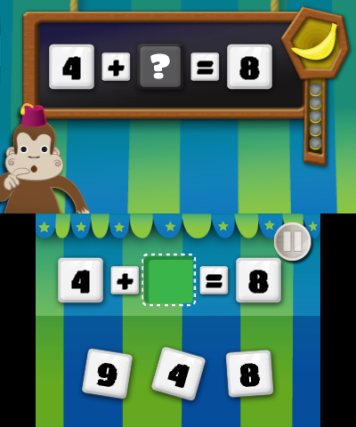 The four minigames are extremely simple and easy. Take Mickey the Monkey’s game, for example. You are given a equation like 5 + ? = 8 on the touchscreen along with some numbers to choose from, and at the beginning the correct answer is already displayed on the designated place, only it’s greyed out. You drag the number with your stylus over the greyed-out number and after repeating this a few times, Mickey finds his hat or banana and goes, “Bravo!” The difficulty does increase with each level and those greyed-out hints will disappear after a while leaving it up to the player to give the correct answer.

The visuals are nice: they’re bright, cheery and colourful; exactly what a game meant for kids should look like. The sound effects and music don’t have a lot of variety, but they’re also cheerful and aren’t distracting.

Another really great thing about the game is that apart from English, there are five other languages, so if one of those languages is your native languages the game will do well for you. Older gamers will probably find Happy Circus insulting with its overly simple gameplay and presentation, but it’s not meant for them. It’s meant for children, really young ones at that. The low price doesn’t hurt either, so if you’re a parent and you think your toddler could do with an edutainment game, Happy Circus is a good choice.

Or you can just get out the ol’ cane and exercise book, whichever works. 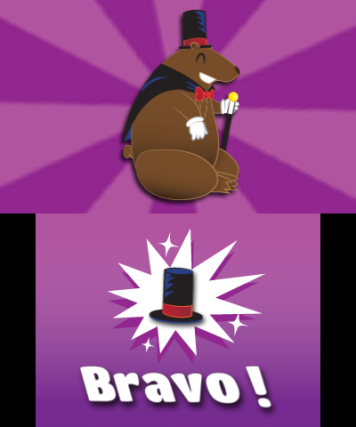