I’m not a big fan of the FPS genre, especially not on consoles. However, I have never played a FPS game on my Nintendo 3DS until now. The latest FPS title by Teyon games, Heavy Fire: Black Arms 3D is my first ever FPS experience on Nintendo 3DS and it isn’t bad.

The gameplay is simple as you’d expect from a FPS, the camera perspective is on-rails which isn’t usual for a FPS but looks similar to shooters you’ve played in arcades. You will see a lot of enemies popping up every now and then, there’s no cover for you neither for the terrorists, it’s all out war with no hiding. You have to shoot enemies as quickly as you can before they land any hits on you. The game is a bit difficult at first but once you get the hang of it, it will be smooth sailing (or shooting). 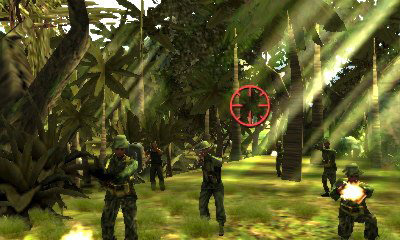 Graphics aren’t bad at all. You will be disappointed if you’re expecting Battlefield 3 esque graphics, however, the graphics Heavy Fire: Black Arms 3D has to offer are pretty good. The cutscenes (which you’ll find a lot in the game) are also beautifully rendered.

Controls are simple and easy to grasp, L/R for Shoot and B to Reload. The aiming is really fun as you don’t have to use the Circle-pad instead you have to aim with the stylus on the touchscreen. The aiming is accurate and all controls work as you’d expect them to, no complains here.

To conclude my review, I’ll have to state that there are a couple of features I’d want in Heavy Fire: Black Arms 3D like the gameplay should be more strategic rather than just “Shoot anyone who appears on the screen”, there should be areas for covers and stealth features which would really enhance the gameplay even further.

All in all, Heavy Fire: Black Arms 3D does not disappoint me as my first FPS on Nintendo 3DS. The game is really fun and has a lot of action. It’s available on Nintendo eShop for a price tag of $4.99, I’d have to say it’s well worth the money. I’ve seen crappy games go for twice its price. If you’re a shooter fan then you must give it a try, I’m sure you won’t regret it.