A melancholic warrior or hero of time is no stranger to the platforming world. But the hero that Team Cherry’s Hollow Knight gives players to control is definitely unique. The quiet warrior descends into the kingdom of Hallownest to save them from The Infection, a force that turns the residents of Hallownest into twisted antagonistic versions of themselves. Can the Hollow Knight thwart the Pale King? Or is Hallownest doomed to decay? Through a Metroidvania Souls-like exploration approach, the player will decide if they are up to the challenge.

First and foremost, it has to be said that the narrative of Hollow Knight is like most platformers; it’s a bit, well, hollow. The gameplay starts off with beautiful hand-drawn visuals that take the reader on a sparingly worded journey. It’s clear that there’s something going on in Hallownest, but it’s by no means a blockbuster storyline. It’s not completely clear what is happening throughout most of the narrative, but it slowly becomes clearer and clearer with each character the Hollow Knight speaks with. In short, the bug inhabitants of the kingdom are dying and becoming infected. It’s up to a hero to save it or else doom shall surely follow. The infection comes in waves too, it’s not just one season. 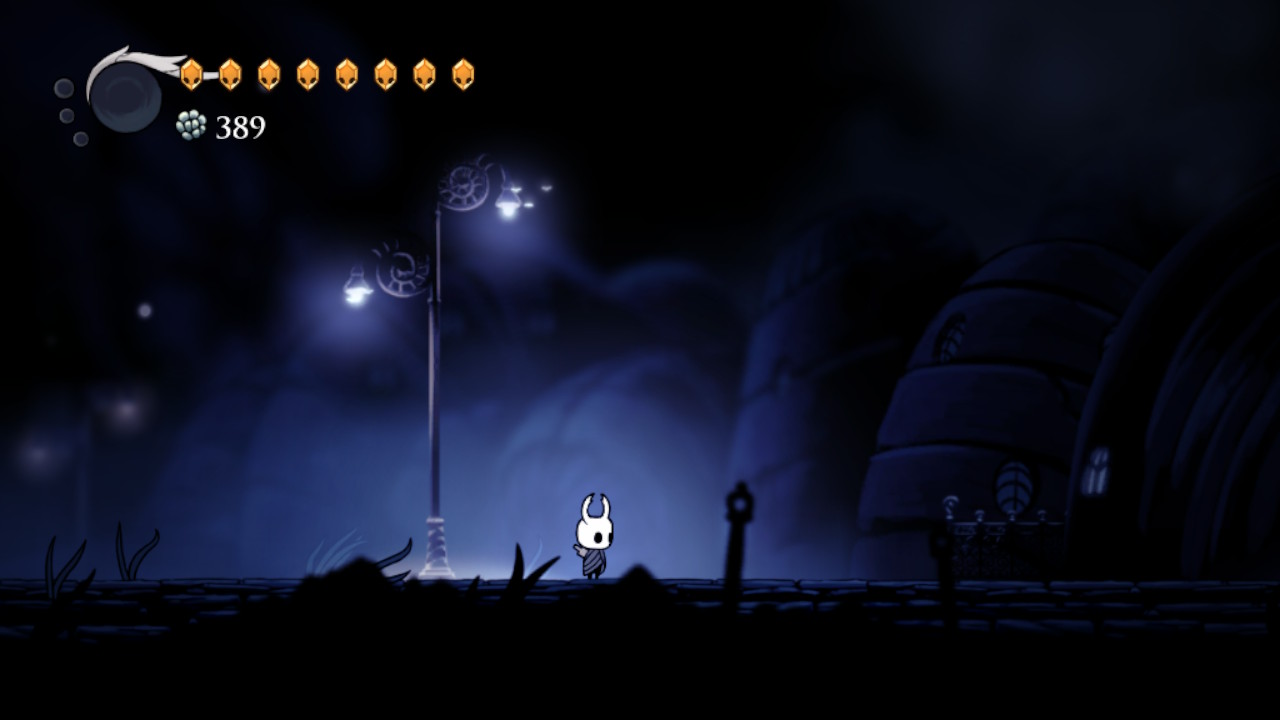 While the lore may be vague within the game, it’s definitely worth a Google search to read and uncover more of the story that Team Cherry put into this game. The characters are all well created, filled with melancholic personalities. Collectables are immense, and the gameplay is equally intense. The progression is slowly paced but works in favor of the gameplay. The story is meant to be explored, talking to everyone will fill in the gaps. If you’re hoping to speed run a game, look elsewhere. For a hand-drawn indie title, this game can take an impressive 30-35 hours. Speaking from experience, spending over 40 hours with the game still does not meet the completionist level of commitment this game can give a player. Seeing the total of 103% is satisfying, but it isn’t the all-exciting 112% that is achievable by beating all of the DLC and content that comes packaged in with the Voidheart edition of the game.

Hollow Knight follows a Metroidvania gameplay style. A small part of the map is given to players to explore and gradually unlock. Players start in Dirtmouth, the main hub of Hallownest. It’s here that players will frequently return to unlock abilities, buy items, meet new faces, etc. There is some linear progression in this game, where players will naturally continue their way through the story, however, exploration is extremely encouraged. Players are pretty much given their sword (needle) and set off into the void. The controls start off simple, with jumping as B and swinging a needle with Y. Those are the main things the player needs to know, and a brief tutorial is given.

Every ability discovered in the game provides a button map that is always accessible to the player. The abilities are key unlocks in the game, so they have been purposefully left out of this review to avoid spoilers. What can be said though is that they are all worth finding and make traversal in Hollow Knight even more fun.

Controls get much more complex throughout the game as Hollow Knight unlocks abilities. It’s easy to think this is a simple game off the top. It’s not. It requires precision platforming and combat throughout. On that note, the protagonist’s ominous but cute appearance should not fool players. This game earns its souls-like badge. The difficulty level is tough but mostly fair. When opening the main menu, it’s clear that Hollow Knight will be giving players hours and hours of content. There are a lot of empty spaces in the Inventory, and the Map is nonexistent until you find the cartographer who gives it to you. 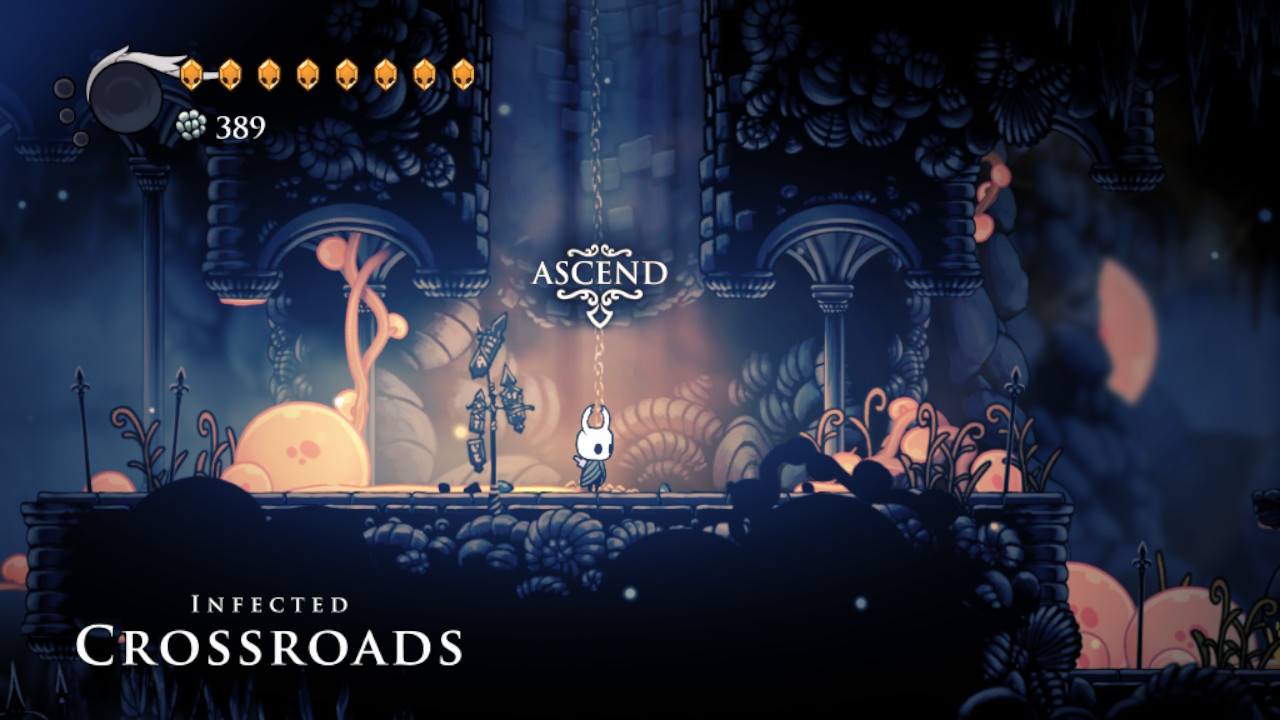 The Map: Does Anybody Have a Map?

The Map is a key gameplay element, but it’s definitely not enjoyable at times. Finding the map maker is sometimes very difficult and knowing your way around Hallownest depends on it. Some of the longer hours admittedly were spent looking for the map maker, and at a few points it’s worth checking the faithful Internet for guides on this game. Once players find the map maker, though, the exploration gets moving. This is one flaw of the game that unfortunately makes progression feel very slow, but at the same time, it is a core gameplay mechanic that has to be accepted by players to fully enjoy and understand Hollow Knight.

Combat in Hollow Knight is fluid and precise. Enemies are usually quick to kill throughout exploration and increase in difficulty with progression. There are a number of different characters players will encounter and each one goes into the ever-growing journal. The game tracks your encounters and gives players an overview of how they fight and hints on how to defeat them. 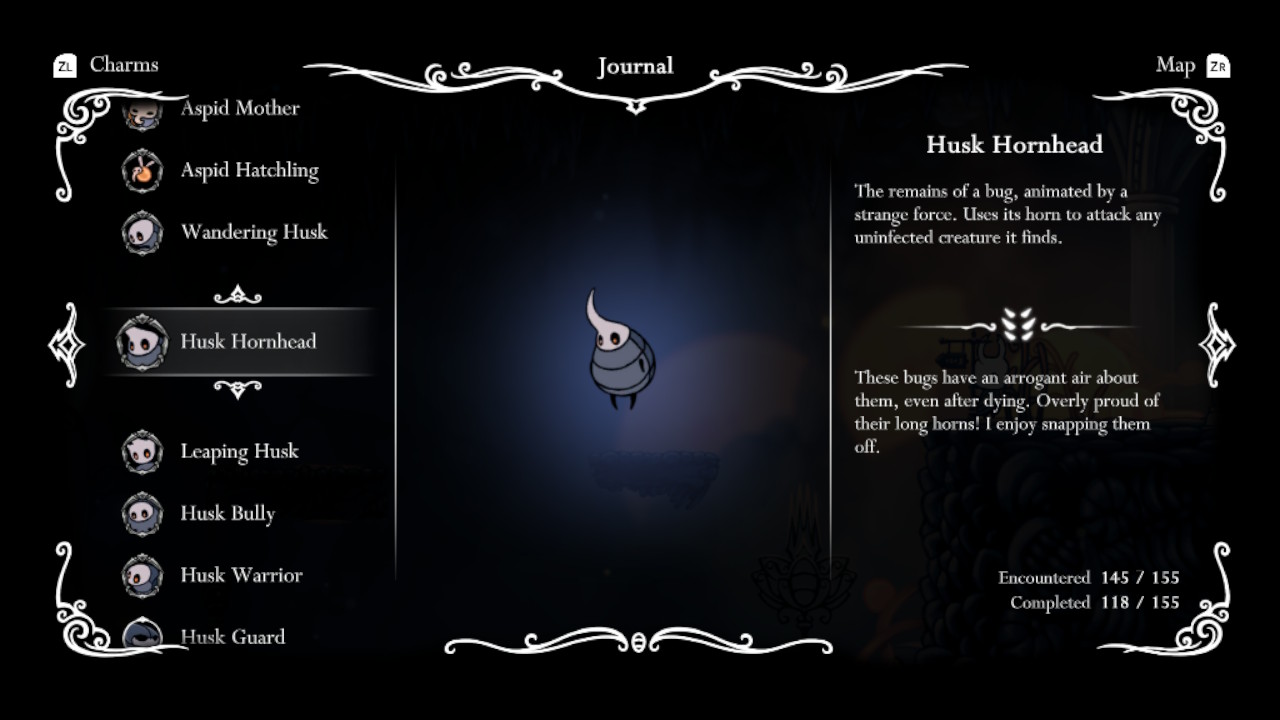 Bosses are a treat in the game. They are all unique and challenging, providing players with creative gameplay to keep the fight interesting. It’s very much a ‘learn the pattern and slay’ loop. Bosses can be replayed and there are remixes of them as well within the free downloadable content in the game. Hornet for instance, who becomes a regular encounter throughout the game, uses attacks that complement the abilities you’ve discovered along the way. All of the bosses feel regulated to the abilities found in the game and each level or section ends with a boss encounter that feels right for the role. Mini Bosses like the Mantis Lords are challenging and keep players on their toes throughout the game. While frustrating, the fights feel fair and the final bosses truly test the player’s skills.

In the current and only available edition, all of the DLC is free. The Grimm Troupe, Lifeblood, Godmaster, and Hidden Dreams DLC packs provide a ton of extra content after the main game. The coolest and also occasionally frustrating part, though, is finding this DLC within the game. It makes sense as the game is built on this mechanic. 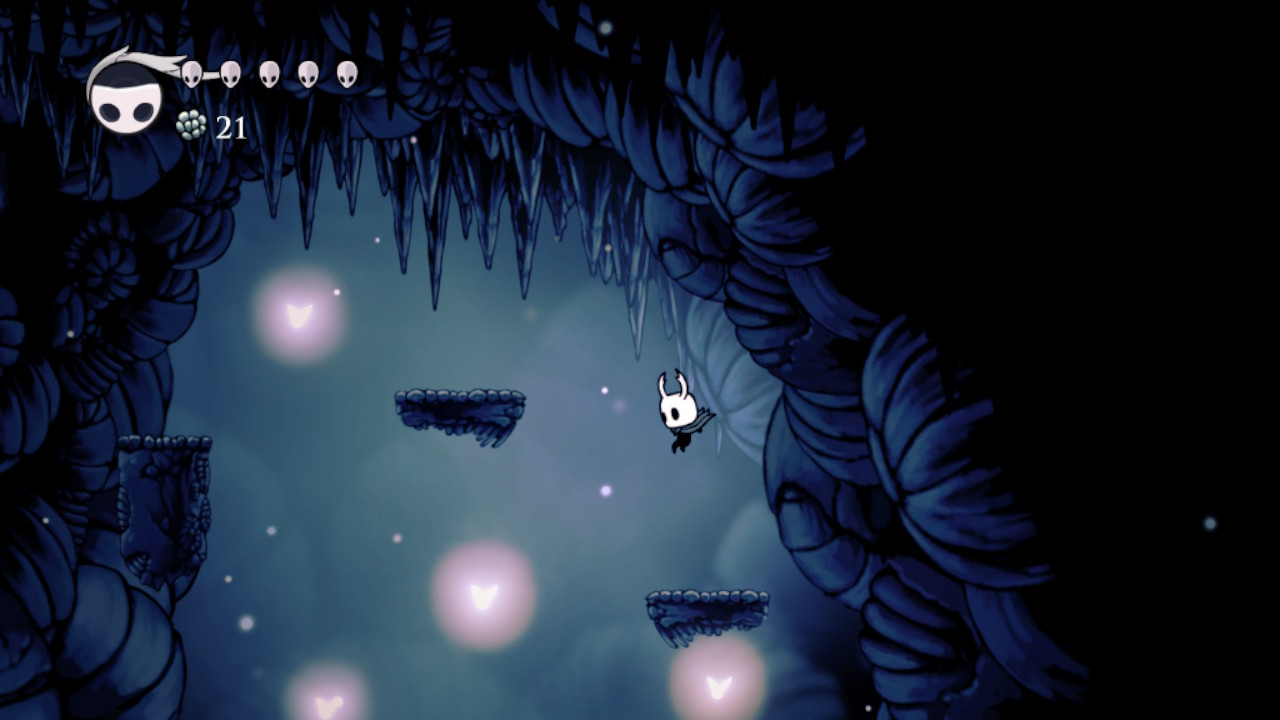 After completing the game, players unlock the Steel Soul mode where there is no reviving and death is permanent. This is a scary mode meant for gamers who enjoy harsh consequences for their gameplay and are skilled players of souls genres. Regardless, the challenge is there for all to partake in after completion of the story, making Hollow Knight quite replayable. Finding all of the secrets, bosses, collectable charm abilities, vessels, and shards takes a long time. The main game is not the full charm factor that Hollow Knight has on players. Seeing how far you can go is great fun and is a nice challenge to add to an already very lengthy gameplay title.

Hollow Knight boasts some incredibly detailed hand drawn sprites. Visually it feels like the player is playing through a graphic novel. The art is very detailed and every illustrated character feels unique. The enemies throughout the game are varied enough that traversal and discoveries never feel repetitive. The level design in each discovered area fits within the established world, but also pushes the player’s expectations. Sometimes you’ll find yourself in a castle, other times you’ll be inside a bee hive. The variety is appreciated as this game is a long haul, and the ride is worth it.

Thankfully, the music makes searching for everything very enjoyable. Christopher Larkin’s compositions undeniably match the tone of the game. The game certainly knows its identity. The melancholy music pairs well with the malevolent enemies and bosses in Hallownest.

This review would be incomplete without mentioning the lack of guidance given to the player in Hollow Knight. This game is a Metroidvania exploration title through and through. There are moments where players will be left searching through the void for the mapmaker, or the next vessel ability, and sometimes won’t ever find it without some luck. There’s one ability that cannot be found without some very creative brainpower or looking up a game guide. This can occasionally be a frustrating experience and while it is a core mechanic, it would have been nice to have had the option to go to Dirtmouth and talk to a character to help progress the story along. 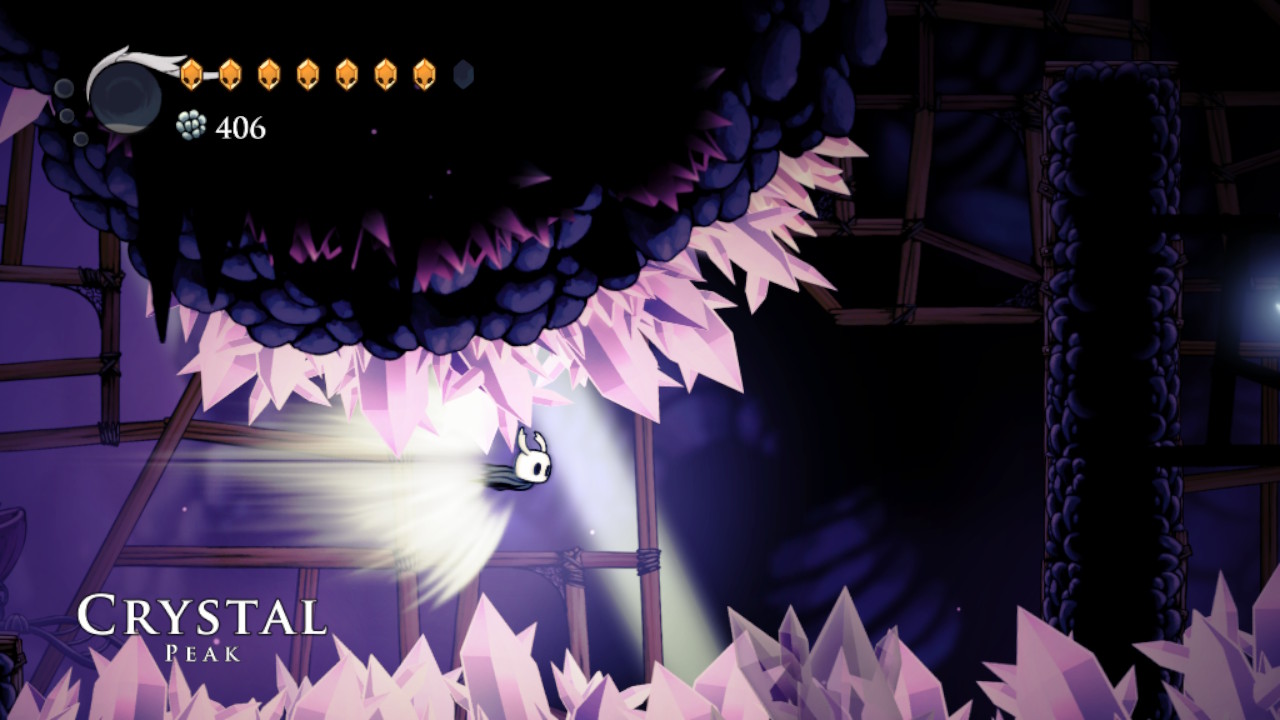 However, the game runs very smoothly and at the time of writing, there are no noticeable technical bugs to pair with the real bugs the protagonist fights throughout the game. The polish that Team Cherry has left with Hollow Knight is admirable.

All shards considered, Hollow Knight is a very well-made and polished Metroidvania adventure. If you are looking for a game to take up a lot of time, but not a lot of your wallet, Hollow Knight is that game. While the small dips in progression and frustrating but overall fair difficulty may make players want to quit out of Hallownest and let the bugs just get infected and die, Hollow Knight shines as a must-play essential game for platforming/action lovers everywhere.