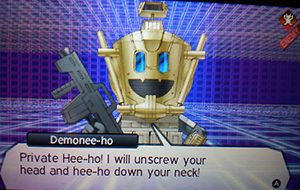 What is Demonee-ho’s weakness and how to beat him?

If you really want to take him out quickly, make sure to enter the battle with demons that repel ice or gun element attacks. Demonee-ho will lose turns, making it safer for your party and you’ll end up doing more damage to his HP with a full team.

What relic do you obtain after defeating Demonee-ho?

After defeating Demonee-ho, you will obtain the Firearm Box relic. It’s a key item and also a rear relic. You’ll need it at a later part of the game.