Koga Saburo is a level 35 demon of the Dragon race in Shin Megami Tensei IV. The Ashura-kai gives you the quest of slaying this demon in battle for their own benefit. The quest is called, Off Koga Saburo. It appears that you don’t have much of a choice in the matter because the Ashura-kai kidnapped one of your fellow samurai.

This guide teaches you Koga Saburo’s strengths and weakness, and it also tells you how you can easily beat him. You can also see what he looks like in the screenshot below. 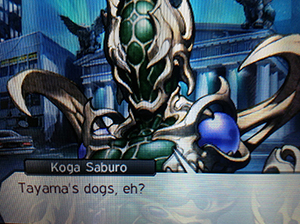 How To Beat Koga Saburo in Shin Megami Tensei IV

What element skill is Koga Saburo weak against?

What elements does he block and/or repeal?

Note: You will take damage and lose turns if you use a force element skill against him.

Fire, electric, and gun element attacks all work against this demon.