Lucifuge is a level 70 demon of the Tyrant race in Shin Megami Tensei IV: Apocalypse. He can be found at the Hall of Eternity B and you will be required to defeat him the first time you meet to progress further in the game.

This guide shows you his weaknesses, his strengths and how to defeat him. 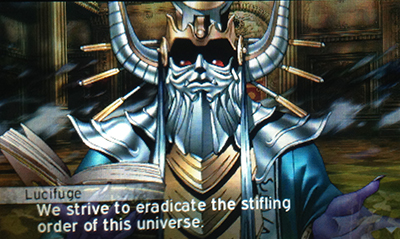 How To Beat Lucifuge in Shin Megami Tensei 4: Apocalypse

He is weak against electric skills and he repels both gun and force skills.

When I battle him, I did not try a dark skill, therefore I do not know if it damages him. Seeing as he is Lucifer’s right hand, it might be common knowledge that he either resists or blocks them.

During his battle with you, he may use the following skills :

Getting the right armor for the battle :

Armor that gives you resistance to force and/or gun skills will be extremely helpful, as long as you’re not weak to dark skills.

Watch out for magic repelling :

With good armor, you do not have to worry about dying anytime soon (as well as your demons if they have the same resistance). You can heal yourself or revive any fallen teammates during the battle if you have the needed skills, but as long as you exploit his weakness and take less damage due to your armor, you should have the match in a bag.

Makarakarn is a scary skill you will need to watch out for. Carrying demons with physical skills might come in handy for such an event when the enemy uses it.

With the combination of electric skills, physical skills, an assault attack with your partners and maybe even Tetrakarn/Makarakarn (might be effective since he lacks an almighty attack), victory is certain.

After defeating him, you will obtain the Seal of Rejection.