Let me be honest here. Minotaur is the toughest opponent that I have faced so far in Shin Megami Tensei IV. I’ve tried to beat him over 15 times. Yes, I restarted my game over 15 times by now. I’m too cheap to pay Macca to Charon so that I can revive my protagonist. 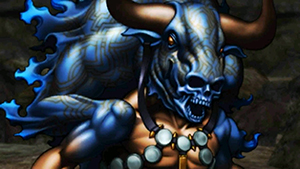 ( What Minotaur looks like in Shin Megami Tensei IV )

Enough about that. It’s time to learn how I easily beat Minotaur. I should begin by saying that Minotaur has a weakness. I first discovered it when Jonathan’s demon used its skill. Basically, Minotaur is weak against ice element attacks.

How To Beat Minotaur in Shin Megami Tensei IV

Before I get started, you can always change the difficulty of the game after visiting Charon twice. Now that’s out of the way, you should know that I’m playing on the Prentice difficulty.

It is very important that you have a demon with ice skills in your party when battling against Minotaur. After all, he is weak against ice attacks. If you have a Bufulo Stone (item), make sure to keep it. It will come in handy because it’s basically an ice attack.

When the battle begins :

After the first conversation with Minotaur, the battle will begin. I used Shan Xiao, Chagrin, and Oni as the demons in my party. Oni knows an ice skill (Bufu), and Shan Xiao knows Fang Breaker which reduces the opponent’s attack (that’s very useful). Chagrin knows Rakunda which decreases the opponent’s defense, therefore, my attacks did more damage.

During the battle, after taking out some of Minotaur’s HP, he will talk to you about your skill and how it pales in comparison to what Aquila was capable of. When he asks if you genuinely believe that you can defeat him, answer him with, “We are determined to win“. It will increase your protagonist’s attack. However, make sure that your protagonist has enough HP to survive Minotaur’s turn to get a chance to attack.

The next time Minotaur talks with you, he will say something about meeting his match and questioning if samurai have no limits. Answer him with, “Indeed not“. Minotaur should get disturbed and his aim will decrease. He will also begin using new moves that you have not seen in the first few turns (this is because his HP is getting low).

Important: Around this time I used my Bufulo Stone. My MP was low and it gave me another turn to drain a chunk of Minotaur’s HP because his attacks at this point in time have the possibility of eliminating your entire party. It’s also best to team up with Jonathan when fighting Minotaur because Jonathan’s demon is capable of draining the most HP with its ice skill. Isabeau is also decent, however, Walter will give you a tough time (attacks miss).

The third time Minotaur talks will be his last during battle. This is when you know his HP is very low. Just keep striking him and he will eventually go down. Try to summon anymore demons that you have if your current ones fainted during battle. Ice attacks should score you another turn to summon additional demons due to it being Minotaur’s weakness.