Mitra-Buddha is a level 82 god of the Fury race in Shin Megami Tensei IV: Apocalypse and was reborn thanks to Inanna. You will be required to defeat him in the Cosmic Egg to progress with the main story of the game.

This guide teaches you a strategy to easily defeat him. 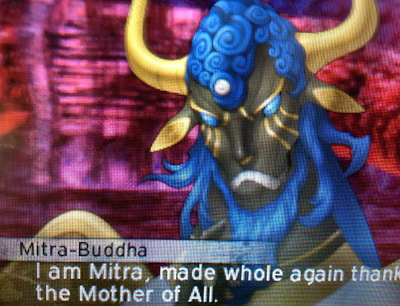 How To Beat Mitra-Buddha in Shin Megami Tensei 4: Apocalypse

Where to get effective armor to battle Mitra-Buddha

Unfortunately, there are no shops that sell upper-body armor that resists/nulls/repels both physical and ice attacks. The most you will get are :

Nibelungen is an upper-body armor that repels physical attacks and is sold at the Members-Only Club at Ginza’s Shopping District (not the black market in the underground district / it’s one of the areas out of the 3 in Ginza).

He is weak against fire and force skills, blocks dark and light skills, and has resistance against physical and ice skills. He has an auto-activated skill known as Self-righteous vow which activates whenever he is hit by his weakness.

The strategy for defeating him

Do NOT use skills that he is weak against. His self-righteous skill will automatically be activated and all of his stats will increase each time he is hit by his weakness, therefore avoid it.

Instead, use skills that lower his attack/defense, hit/evade rate, etc (eg. Debilitate).

He will ask you questions :

During the battle, he will ask you two questions where you have choices to make.

1st question: He will ask you to form a contact with him to find true peace.

2nd question: Next, he will ask what you will use your strength for.

The moment he turns red when you highlight him to attack, if you have all of your actions for the turn and your party is filled with teammates who have skills which he is weak against, now would be the perfect time to use them. Although his stats start increasing and you notice your attacks are doing less damage, the extra turns from exploiting his weakness and the smirk perks will guarantee his defeat.