After completing the Get To Cafe Florida quest, you will be given another quest called “Kill The Underground Demons”. After heading to your home town, a demon who claims he is the true sun goad will appear and you will be required to defeat him. This demon is called Quetzalcoatl and he is a level 50 demon of the dragon race. 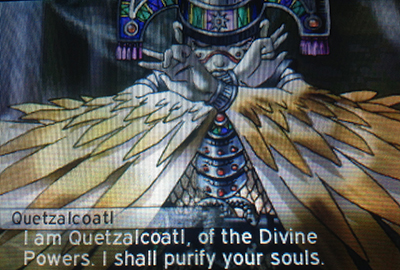 How To Beat Quetzalcoatl in Shin Megami Tensei IV: Apocalypse

Quetzalcoatl isn’t that difficult to beat, however, it isn’t like he is unable to destroy your party when your guard is low, therefore you should not underestimate him. All you have to do is make sure he doesn’t have an attack you’re weak against.

Dark skills are the only skills that hit him extremely hard.

Ice, electric and gun hit him neutrally. Physical, fire, force and light skills do little to nothing against him since he has good resistance for those skills.

With an assist attack, one powerful dark skill user and an almighty skill user, it is possible to defeat Quetzalcoatl without breaking a sweat. If you have demons on your team that are weak to force skills, Quetzalcoatl may indeed have the advantage. Otherwise, the only way he might be able to defeat you is by combining the increased magic stat with the free smirk and by taking out your party members one by one with Zandyne.