Samyaza is a level 73 demon of the Tyrant race in Shin Megami Tensei IV: Apocalypse. He appears as a human (you will know who although it will not be mentioned on this page due to spoilers) and you will have to engage him in battle during the certain quest. 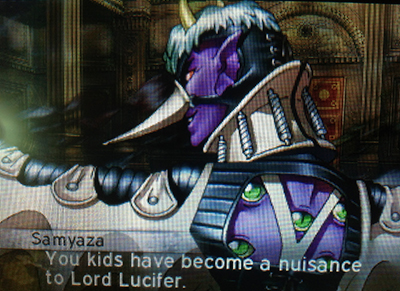 How To Beat Samyaza in Shin Megami Tensei 4: Apocalypse

His weaknesses are fire and ice skills.

Do not use electric, force or dark skills against him because he blocks them and you will lose 2 turns for each time one is used. Gun and light skills hit him neutrally.

Recommended partner to use while battling him :

The top two choices are Isabeau and Hallelujah. They both have skills Samyaza is weak against although Hallelujah takes it to another level since his skills do severe damage instead of heavy. Therefore, Hallelujah might be the number one choice.

If your team desperately need the healing support, go for Asahi.

The others will be of little to no help since they can’t exploit Samyaza’s weaknesses.

Using a defense support skill may be beneficial to you due to the severe skills Samyaza possess. If Asahi does not offer you healing support, you will certainly need teammates who do, as well as be able to revive with full HP.

Hallelujah is recommended over Asahi because Samyaza loves targeting them and you will lose your healing support when you could have used your demons for healing and have your partner deal additional damage to him.

Getting the right armor :

As seen in the skills list above, force, electric and dark skills are what you cannot afford to be weak against. If you show signs of weaknesses, purchase new upper body armor so that it changes and do the same with demons through recruitment or fusion.

The Blue Jinbaori and Gold Jinbaori are good armor you can get for this battle :

Dangerous moments to look out for during your battle with him :

Makabuild combined with one of his severe or heavy power skills is extremely dangerous to the point you may want to keep a Makarakarn (magic repel) user in your party at all times during your battle with him.

Enigmatic Ray will cripple your party unless you have Energy Drain (a lot better than spirit drain).

Magic Torrents isn’t that powerful and you will most likely be able to tank hits from it.

The question he asks during the battle :

It’s not uncommon for powerful demons to ask questions during battle. Just like previous demons, Samyaza will ask you a question. He will invite you to join his side and you will have one of the options to choose from for your answer :

As long as you can survive hits or bring back fallen teammates to life at full HP so that you’re not at a disadvantage, you will have a chance at winning. Exploiting the fire and/or ice weakness is extremely important.