Satan is a level 99 demon of the Primal race in Shin Megami Tensei 4: Apocalypse. He challenges you during the game to test out if you’re capable of continuing with the main storyline (not going to mention exactly what but you’ll know if you’re battling him).

This guide helps you defeat him. 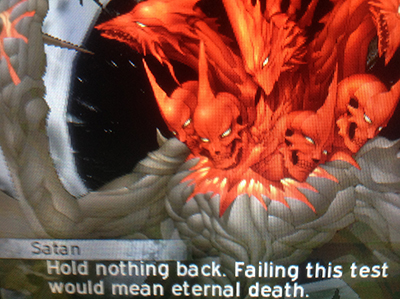 How To Beat Satan in Shin Megami Tensei IV: Apocalypse

Satan’s weakness in the game :

Tough luck. He has no weaknesses (that is to be expected).

He absorbs all fire, dark and light skills. In addition, he has resistance against gun skills (probably physical skills too since my Shiva’s Akasha Arts skill didn’t do much damage).

Increasing your defense (and maybe other stats with recovery) might be your best option. You absolutely need to tank Satan’s attacks and to do so, you will need high level demons in your party. Maybe some armor that resists/nulls/repels physical or fire attacks.

During my battle with him, I found that he used Megiddo Arts and Akasha Arts more than Trisagion (then again, my protagonist had armor that nulled fire attacks).

It is important to keep your assault gauge halfway full (instead of max) when you engage Satan in battle because the second time he talks to you, he will most likely recover all of his HP when he tells you there might be a time when all of your efforts are reduced to naught.

Questions, answers and what happens when you make a decision :

During the battle, he will ask you two questions.

The first is when he asks you which course you would proceed with if you found yourself outmatched. You will have three options to choose from :

Take note, your protagonist might get a mute status if you choose an answer your in-game decisions do not agree with. For example, if you do not care about your friends in the game, choosing the option to rely on your friends might cause the mute status.

The second time he will ask a question (this might be triggered if you choose the third option above). He asks you to choose the route you would take if two paths lie before you – a terrible fate awaits you or an ill fate for your allies. You have three options to choose from :

Good news is, Satan’s little test battle isn’t that difficult as long as you can survive his attacks. Make sure you’re capable of hitting him hard neutrally and that you’re not weak against fire or physical skills.