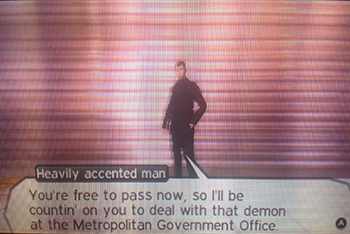 Updated: After replaying the game, I can confirm that the quest is ‘Corpse Disposal’.

However, it’s recommended to complete most of your reminding quests before moving on. There is a possibility that I missed a quest from the list due to memory (I’m trying to remember what I did a couple of days ago), or maybe I added the training battle quests because I completed it around that time. One thing that’s certain is that there is a powerful demon in the next area, so use this time wisely and level up by tackling uncompleted quests.

Note: Another thing that I should mention is, in Tokyo, to pass certain areas, you might be required to complete a certain number of quests that you received from Tokyo’s areas.