In Tales of the Abyss, there is a locked door in Choral Castle with a mysterious purple light. There are also ghosts that leave behind colored orbs after being defeated. Both the locked door and these orbs are connected. It’s a puzzle, some might say. 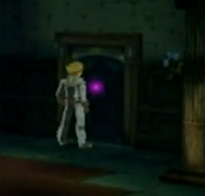 ( The mysterious locked door with the purple light in Choral Castle )

Basically, you have to find out what two colors make the purple color. It’s red and blue. All that you’re required to do is collect the red orb and the blue orb after defeating the ghosts that hold them. Don’t defeat more ghosts than you need, or you’ll have to re-collect the orbs.

How to battle the ghost with the blue orb

The ghost that holds the blue orb is a little tricky to battle. No matter how long or hard you chase it, it will outrun you or disappear. To catch the ghost, use Mieu to blow fire at the ghost by pressing the Y button on the Nintendo 3DS.

How to get the ghost with the red orb

I’m not sure which ghost holds the red orb, however, it’s not as difficult to collect like the blue orb. If it’s the one that passes the two statuses, use one of the statues to block the ghost. Press the A button when next to a statue to move it.

As for the other ghosts, they’re not too difficult to enter a battle.

After collecting the red and blue orbs, go back downstairs to where you first entered the castle. There should be a save circle and a door at the middle of the room. Enter that door and you should find the locked door with the purple light. The door should get unlocked once you have both the red and blue orbs – it doesn’t matter what order you have it in.