The objective of this guide is to help Splatoon 2 players get pure gear (hats/clothes/shoes) or gear with three matching abilities. Pure gear helps players perform better during online matches.

Purchase gear from people at the Square

From time to time, more people with pure gear will show up in your Square. If you like an ability on the piece of gear, go ahead and order it. You may not get it with full-matching abilities, but there is a chance you will get one or two of the same abilities from it.

Use tickets to increase the chances of getting specific abilities

Crusty Sean sells food and drinks at the square. These food and drinks can help you level up faster, earn cash and most importantly, help you get specific abilities on your hats, clothes and shoes.

Spend a ticket and you it will last for 20 online battles (turf war, league or ranked, not private matches or salmon run). Depending on the ability ticket you use, the higher the chance of getting that ability on your gear when it levels up and unlocks a random ability.

How to get drink tickets in Splatoon 2:

Drink tickets can be obtained from salmon run bonuses. Keep playing salmon run, unlock higher bonuses and cash it out when you’re done at the top-left corner of the square or by exiting Grizzco.

The screenshot above shows thee ticker rewards from Grizzco.

Make use of ability chunks

The little kid at the top-right corner of the Square, Murch, can scrub abilities from your gear and give you the ability chunks. Ability chunks can be used to add an ability to a piece of gear, however, you need to grind to obtain ability chunks in order to do this.

In addition to scrubbing, you can also get ability chunks from salmon run bonuses: 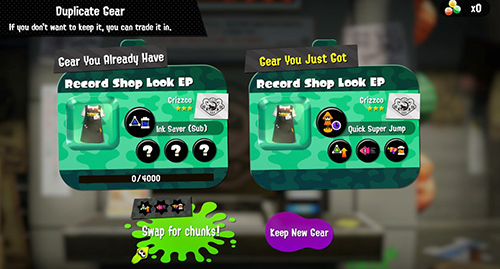 Sometimes you will receive duplicate gear from your salmon run bonuses. You will have the option of replacing the new gear with your current gear or taking ability chunks from the new gear if it has abilities. In this case, it’s best to take the chunks.

Brands can affect the likelihood of unlocking specific abilities on gear. A guide for it is coming soon.

As mentioned above, tickets can help you get certain abilities on your gear faster. If you purchased the Octo Expansion DLC, you will eventually receive drink tickets to use for online multiplayer matches.

After defeating the last boss, C.Q. Cumber will inform you that you can obtain ‘mem medals’ at the start of the Octo Expansion levels. Mem medals can be redeemed for items at the vending machine (open the level map, click the center icon and go up).

Rewards are given in the order: 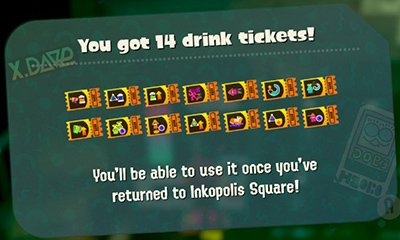 Rank or league matches reward players with much more EXP for their gear than turf war matches. If you want to level up your gear and unlock their abilities faster, it’s highly recommended to play rank or league battles. League might be the recommended option for high rank players.

Unfortunately, food and drink tickets do not stack, therefore that is not an option.