To complete the second part of the ‘Onward to Shibuya’ quest in Shin Megami Tensei IV, you are required to find Club Milton. Finding it can be a little difficult for some people because it’s easy to miss. I missed it once and I was lucky to find it again.

This tutorial teaches you how to get to Club Milton in Shin Megami Tensei IV.

Where is Club Milton in Shin Megami Tensei IV

After using the underground tunnel to go to Shibuya, go left and enter the area. You should now be at ‘Shibuya Station – Front Crosswalk’. Go straight and you should discover another area. This area is called ‘Shibuya – 108 Building’. Look to the left and find a passageway to the underground district. There are four districts with different letters – A, B, C, and D. 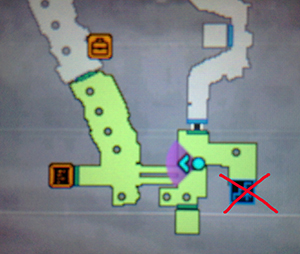 The green area highlighted in the screenshot above shows you the map of Shibuya’s Underground District C. The ‘X’ mark is the exit to the West Entrance of Shibuya’s Station.

Explore the West Entrance of Shibuya’s Station and you will find a staircase that leads to to another underground location. You should now be inside Mark City. Keep moving and you should find stairs. After climbing the stairs, enter the door. That should take you to Dogenzaka. Explore Dogenzaka and you will trigger a cutscene after turning a corner and pushing forward. The ‘Onward to Shibuya’ quest should now be completed.

The guy who talks to you and your group tells you about a demon in Club Milton and how you must beat it. The demon goes by the name of Koga Saburo. From there, just walk forward and you should meet up with the demon. Koga Saburo blocks your path to Club Milton and you can either challenge him or walk away.