When I first played Tales of the Abyss on my Nintendo 3DS, the first question I asked myself was, “how to save game progress?”. I opened up the menu and scanned through the options, but I could not find anything to save my game.

If you encountered the same issue, don’t worry – nothing is wrong with your copy of the game. Yes, it is possible. Don’t go saying, “this game sucks”, just yet. This tutorial teaches you how to save your game progress in Tales of the Abyss for 3DS.

How To Save Game In Tales Of The Abyss For 3DS 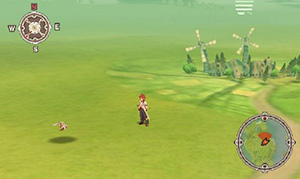 That means if you enter a city (eg. no monsters, just people who you can talk to), you will not see the ‘save game’ option. Then again, most cites in the game include an Inn with one of those game saving circles – so it’s not really a big deal.

To save the game (buttons are default) :