Tiki looks like a really cool character in Fire Emblem Awakening. I could not ignore the chance that I had at recruiting her. If you’re having problems trying to save Tiki and beat Paralogue 17 (Divine Dragon Grounds) in Fire Emblem Awakening, then keep reading to learn about the strategy I used to rescue her and finish off the remaining enemies.

First, here are a couple of screenshots as proof that she joined my party. They’re also handy if you forgot what Tiki looks like in the game. Basically, she is a Manakete like Nowi. She can turn into a dragon and she’s Level 20. 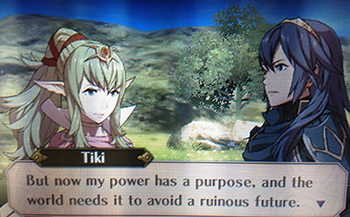 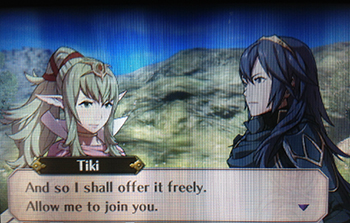 Note: playing on the ‘hard’ difficulty and classic mode.

The conversation at the beginning of Paralogue 17 told you all that you needed to know. Basically, you have to shield Tiki to save her, and the only thing that there is to shield her with, is your army. The enemies will not attack your soldiers unless you literally block a way for them to attack Tiki, otherwise, they will move around you and head towards Tiki. Of course, if they do succeed in finishing Tiki off, your army is most likely the next in line – I highly doubt the Paralogue will end if you failed to protect her.

The screenshot above shows you the characters I used and the positions I had them in Paralogue 17 of Fire Emblem Awakening. Olivia and Noire might be a little difficult to spot due to their ended turns, however, they’re there next to the enemy soldiers at the right.

List of characters that I used to defeat Paralogue 17 :

Shielding Tiki – As you can see from the screenshot above (scroll up), I surrounded Tiki, shielding her from enemy attacks. There is an opening spot where she can be attacked one block down from the left, however, you can decide to block that one off if you wish. Instead, I used Lon’qu (assassin class) to eliminate several flying enemies with a glass bow.

Important: In Paralogue 17, there are flying warriors from the south, easy, and west sides of the map. After each of your turns for three turns, enemy reinforcements will appear. I tried to fight them off without shielding Tiki and I always failed after the last of the enemy reinforcements appeared. I recommend shielding her if you truly want to save her.

Healing – If an enemy did make it through and successfully attacked Tiki with a weapon that can be thrown a distance or ranged magic, I had Sumia and Cordelia ready to heal her. After, I eliminated the enemy with Cherche the next turn (or you can use Lon’qu). Do not break the wall that you built around Tiki, or the enemies will wipe her out without second thought.

Double Bow and Arrow – Noire and Olivia took the right side of the battlefield to take on the enemies that were coming from the East. Noire’s class is a sniper, and her choice of weaponry is deadly against flying foes. Yes, the bow and arrow. Any powerful bow will do the trick. Don’t be afraid to use any character as a substitute who is capable of using bows.

Olivia’s dance technique comes in handy as well, allowing Noire to take down two enemies in one turn. Before you make a move, make sure that Olivia is within range of using dance on Noire to give her the energy of attacking again. Try to take out the enemies with spears, tomahawks, or magic books first before moving onto the others. The team shielding Tiki should be strong enough to take a hit and throw one back.

I used three magic users at the front of Tiki – my main character (Tharja’s husband), Tharja (main character’s wife), and Morgan (the child). Naturally, the enemy will attack one of these characters. However, it’s still possible that they might choose a weakling at the back if their equipment is effective for a ‘one hit kill’ or might have a better chance.

Note: Wind magic is very effective against the enemy.

Healing Items – Don’t forget to pack healing items that restores a great amount of the user’s HP. Your characters are basically shielding Tiki from attacks. That means they’re going to get badly injured. Let the enemy attack. Most of the time you will hit the enemy back after they attack. When it’s your turn, heal yourself if your HP is low and allow the group of enemies to attack you once more. The characters that aren’t shielding Tiki do not need healing items because the enemy will ignore them since they are focusing mainly on eliminating Tiki, however, characters can still be damaged during a battle if you chose to fight an enemy.

Follow the tips above and keep fighting the enemies and you should save Tiki in one piece. The characters that I listed above can be replaced with your own classes. It doesn’t matter if the enemy successfully hits Tiki. She will still join your party if her HP is anything but 0.