WHO WANTS TO EAT ICE CREAM? 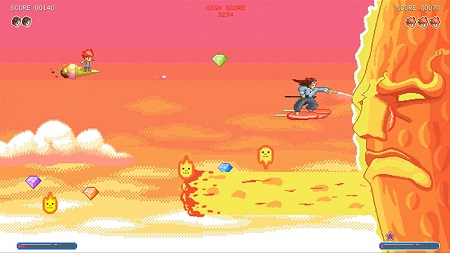 GAMEPLAY:
Some time ago I reviewed a vertical shooter and now it’s time for a horizontal one. The proper genre is a horizontal Shoot ’em up shooter. Still, this is quite an interesting idea: you need to beat an evil “hitler” broccoli that wants to destroy ice cream from the world forcing everyone to eat “tasteless” vegetables.

You will need to defeat them with the help of five different characters: Ace (a kid), Hima (a Snow Monster), Super Cream (Superman parody), Sailor Twister (Sailor Moon parody) and Rei Tou (a Samurai). Each character has its own abilities but they aren’t fully explained.

In the game’s manual, it recommends Ace and Super Cream for beginners, Sailor Twisted for expert players and Hima and Rei Tou for experienced ones. It’s worth mentioning that those last two both have a low range attack. 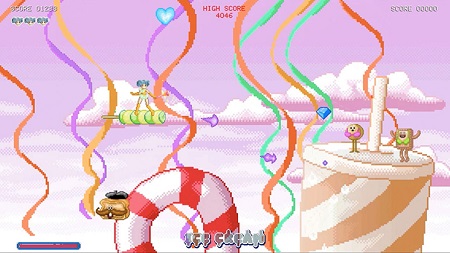 Here you will need to avoid enemies trying to beat them before they attack you where each level follows an arcade style design. The six levels of the game are easy in general, including some of the bosses where you can find a safe spot. Still, this depends a lot on the character used and the player’s skill. Choosing the collectibles can also be difficult in this game.

In the levels, you will find different items that will help you and some of them are actually pretty common: 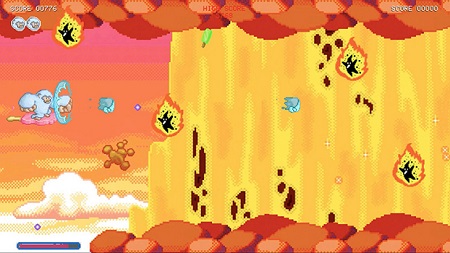 The controls are nice but could have been a lot better: the main menu, A and B buttons do not work, therefore you will accept with the X button and go back with Y button. Once you’re playing, you will shoot with X and A buttons and perform the special attack with the Y and B buttons. You move with the Control Pad and switch to the off-TV mode with Select Button. Why I said better earlier? There is no auto fire function, therefore you need to press the button for each bullet which gets annoying the more you play.

GRAPHICS AND SOUND:
Ice Cream Surfer uses pixel art but don’t get scared because of that since the amount of details is incredible. Sadly, the presence of lag and the lag of motion in some animations do not allow the game to shine in the graphics department, giving a great arcade feel.

The soundtrack on the other hand is quite repetitive and the songs are kind of weird, however, it still fits the style perfectly, making you wonder if it’s from Japan. The voice acting can be better but it’s good enough and some sounds can be a little annoying with the time. 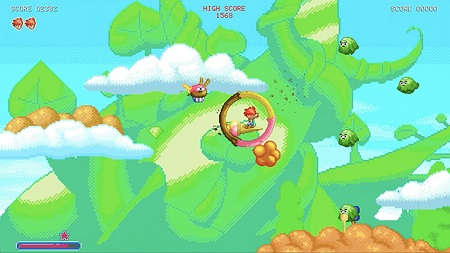 PRESENTATION:
The presentation is nice, but the interface of the game is broken. In the title menu, buttons A and B do not work, the gallery can freeze the picture shown sometimes and the winning screen’s design is broken, where the loader bar is over the score text.

The manual is simple but it has sufficient information for you to learn how to play and find out some more details about the game. The characters are varied and there is some replay value, however, the game’s duration is short and the controls could have been better.

CONCLUSION:
Ice Cream Surfer may not be the best entry on the eShop, but I should say it’s an interesting game. The artwork is excellent and the music is weird but still interesting, therefore if you like weird-feeling games, this is a must have. For shooter fans, you should check the trailer first.