Ikachan stars a little squid that wakes up in an unknown cavern deep within the ocean. The game never explicitly says what your goal is and you don’t ever precisely find out, but by talking to the sea urchins around the sea you can start piecing together what’s happened involving the earthquakes. The story of Ikachan is easily one of it’s high points as it leaves the player wondering what exactly happened.

The game is incredibly short, as I was able to beat it fully within an hour of starting, and that’s with some notable mistakes. Ikachan suffers in that regard, so if you’re looking for a long adventure with a deep story, I’d suggest turning away now. 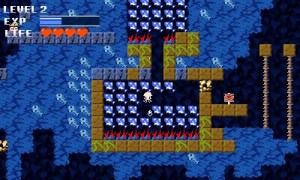 The game is extremely simple and there isn’t much to figure out; most tasks are directly given to you. The world isn’t very large either, so don’t expect to be doing very much exploration.

Ikachan doesn’t have a large arsenal of attacks. In fact, he can only run into enemies with his Pointy Hat that he obtains very early in the game. It can sometimes be frustrating trying to hit an enemy correctly due to Ikachan only being able to swim up and diagonally, although after playing a while it’ll become more natural.

Ikachan isn’t hard; you’ll likely beat the only boss within the game on your first try. The game boasts an EXP system allowing you to level up your health, but it doesn’t really add anything. The game would have not only more replay value, but also a greater sense of exploration for completionists had the hearts been scattered around as items.

Although it’s extremely minor, running into innocent bystanders and triggering a conversation is easily one of Ikachan’s most annoying flaws. More than half the time a character is in some to corridor and so it’s extremely easy to run into them. The game would have benefited greatly if you had to push a button to engage in a conversation.

Ikachan controls very fluid and simple. Using the Circle Pad, unsurprisingly, allows you to aim left or right, the A/B buttons allow you to swim up, and X/Y open the menu showing your items (spoiler: there are only four).

Ikachan’s soundtrack is, put simply, uplifting. It just makes you want to go on an adventure. Although the game doesn’t have a full soundtrack like most games, it’s a joy to listen to, despite it being one song on a loop.

Graphically the game looks great. It’s a great example of a modern pixel based game done right, as it doesn’t look like it’s from the NES.

The game also features 3D. It adds a nice sense of depth to the world but to it’s dismay, it doesn’t add anything to the gameplay. 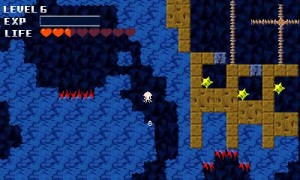 Put frankly, once you beat Ikachan, you’re done. The only thing that may make you want to come back is the levelling system, as it is possible to miss all of the fish needed to reach the maximum level, but even then there isn’t a substantial amount of content to do after finishing the story.

Ikachan offers a sweet but incredibly short gameplay experience with an incredible song to accompany it all. The games biggest downfall is it’s length. Ikachan would make for a perfect time killer during a long car ride, but the $4.99 price tag might not be worth it to those on a strict budget. If you’re interested in Ikachan, wait for a sale.